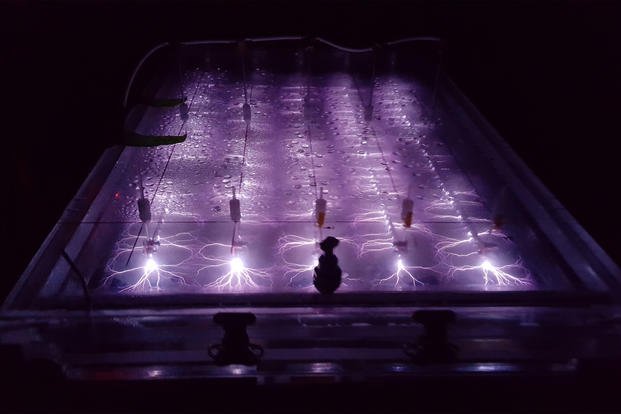 A group of researchers at Clarkson University in New York is developing a way to destroy per- and polyfluoroalkyl substances (PFAS) in water.

In collaboration with the U.S. Air Force, the team is using machines called plasma reactors to sever the chemicals’ carbon-fluorine bonds, according to Business Insider.

An important distinction to make is that the technology applies only to PFAS in groundwater. The researchers are in the process of working on a separate project to remove PFAS from soil, however. This technology could also be more cost-efficient, according to Business Insider.

Researchers built a 20 foot long mobile trailer, which holds two plasma reactors. For two weeks in September, PFAS contaminated groundwater was pumped from the Wright-Patterson Air Force Base in Ohio into the reactors, reported Business Insider.

Argon gas at the bottom of the reactors carries the PFAS molecules to the surface, then high-voltage electrodes are used to generate plasma. The plasma zaps the water’s surface, where it spreads, hitting PFAS molecules and splitting them, according to Business Insider. Once the carbon and fluorine molecules have been separated, the PFAS compound is destroyed…”