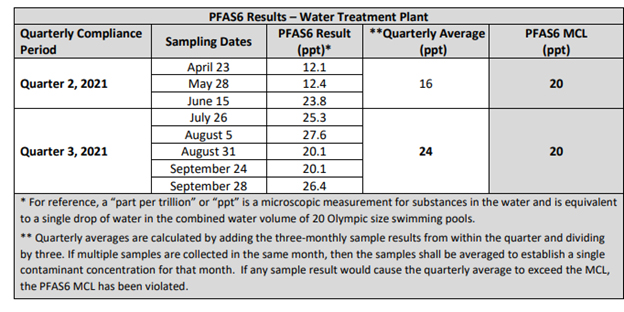 “Two separate issues have residents questioning the safety of their water in Woburn.

Over the last couple of days, many people have reported cloudy water coming out of their faucets. This comes at the same time residents got at a letter about high levels of chemicals in the water detected back in the summer and fall.

Long-time Woburn resident Debbie Fagan has had murky water in her home this week.

‘It almost looked like someone had poured in paint with the water,’ Fagan said. ‘I noticed over the last couple of days it was cloudy and had a white film to it almost.’

Mayor Scott Galvin says the reason for the murkiness is a change in the weather and oxygen in the water. He said the cloudy water is unrelated to a letter that went out to residents this week about the level of PFAS chemicals in the water.

PFAS chemicals, which are commonly called ‘forever chemicals,’ are common in consumer products like non-stick pans and some firefighting foam. They have been linked to a series of adverse health conditions, including some cancers.

Massachusetts considers anything above 20 nanograms of PFAS per liter of water to be unsafe.

According to the letter residents received from the city’s water department, Woburn’s water testing for the third quarter of the year showed 24 nanograms per liter, which is above the level the state says is safe.”…