Connecticut Will Inspect More Than 2,400 Locations in the Hunt for Dangerous PFAS Chemical Contamination 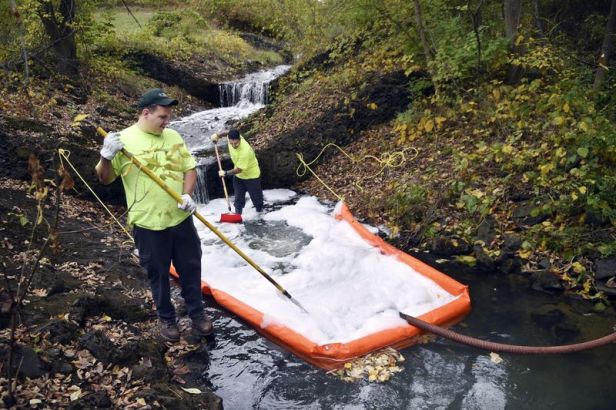 “Catherine Iino first learned that her town of roughly 6,000 people might have a problem earlier this spring,

Iino, the first selectwoman in Killingworth, was contacted by state environmental officials in March and informed that several water samples would need to be pulled from the wells that supplied town hall, the volunteer fire station and a nearby garage used by the local public works department.

Similar testing at a neighborhood less than a half-mile to the north, she was told, showed signs of several human-made chemicals known as perfluoroalkyl and polyfluoroalkyl substances, or PFAS. The state was concerned the compounds, which have been studied for possible ties to developmental issues, thyroid disorders and several cancers, might have also found their way into other nearby water supplies.

Several of the water samples taken from the town buildings contained concentrations of the chemicals that were far above a recommended health limit established by the state. State officials later sampled the wells at another 70 nearby homes to test whether their drinking water was safe and to determine how far the contaminants may have spread underground.

Roughly 34 of those private wells contained lesser amounts of the chemicals, and 15 of the wells exceeded the advised health limit, just like the tap water at the town hall.

Those results marked one of the first times that Connecticut officials uncovered widespread drinking water contamination tied to PFAS. But it is unlikely to be the last.

Connecticut’s health and environmental agencies believe there are other pockets of contamination hiding throughout the state. That’s why the agencies plan to expand their search for the chemicals, with officials fanning out to test soil, streams, fish, groundwater and drinking water sources for signs of the toxic compounds.

In recent months, the state Department of Public Health and Department of Energy and Environmental Protection developed a map of more than 2,400 locations in Connecticut where the agencies suspect the chemicals may have been used or released in the past.

The two agencies intend to use the new map, which is not yet available to the public, to pinpoint locations where the chemicals may pose the greatest risk to public water supplies and private drinking water wells.

PFAS have been used in the United States for decades to produce things like nonstick pans, waterproof clothing, stain-resistant carpets, grease-resistant food packaging and a firefighting foam that was routinely sprayed during emergencies and training exercises.

That firefighting product grabbed news headlines in Connecticut in 2019 when a private hangar at Bradley International Airport, north of Hartford, spilled an estimated 21,000 gallons of the chemical-laden foam into the Farmington River.

It’s unlikely that all of the locations highlighted on the new PFAS map are contaminated with PFAS, but they will provide a starting point in the state’s scavenger hunt for the chemicals. The map was one of several recommendations that came out of a 2019 task force on PFAS that was set up by Gov. Ned Lamont.

With so much testing expected in the coming years, the state is preparing to hire five new employees who will oversee the state’s sampling for the chemicals in drinking water.”…