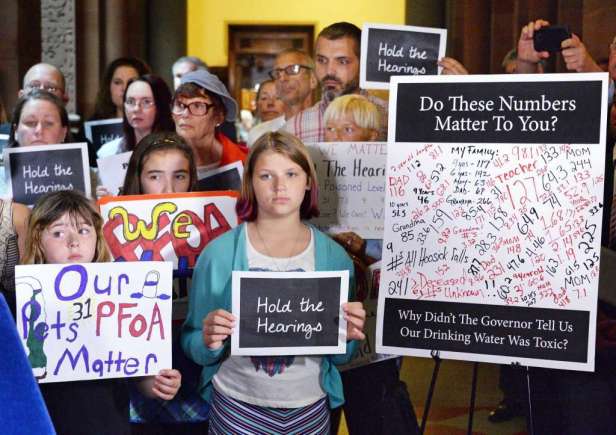 But Hickey left a hearing at the U.S. Capitol Wednesday with no assurance that the EPA would soon set any national safety standard on the chemical that Hickey believes caused his father’s cancer and death.

David Ross, assistant administrator for the EPA’s Office of Water, testified to a U.S. House of Representative committee Wednesday his agency is still evaluating whether, and at what level, to set a federal maximum contaminant level for PFAS and PFOAS.

Ross could not promise that a maximum contaminant level (MCL) would definitely be set until their evaluation is complete, he said. But a decision on setting a federal standard should be made before the end of the year, Ross added.

‘It’s disheartening,’ said Hickey, widely credited with discovering spotlight PFOA (perfluorooctanoic acid) contamination in the drinking water of Hoosick Falls in 2014. ‘There is enough science out there to establish an MCL.’

Hickey’s frustration at the EPA’s response to PFAs was echoed at the hearing by multiple Democratic lawmakers, most notably by Rep. Antonio Delgado, D-Rhinebeck, whose district includes Hoosick Falls…

‘You’re suggesting that you could go through this whole process and ultimately not land on an MCL,’ said Delgado. ‘You want folks all across this country to continue to wait and wait and wait on the off chance that maybe we’ll get a point where you just might have enough information to issue an MCL. Is that what you’re telling me?’

Delgado and other Democrats pressed the EPA to quickly set a federal standard on what exposure levels to the chemical are safe and regulate the discharge of PFAs and PFOAs in water sources. They also asked for further EPA study of the health impacts of the chemicals, which have been linked to cancers, thyroid diseases and other serious health problems…

Ross assured legislators that the EPA understood the gravity of the issue.

‘You have my commitment that we share the urgency,’ Ross said. ‘We are doing everything we can as quickly as we can.’

But Ross’s inconclusive answer on whether an MCL would be set for the chemicals appears to be a step back from earlier this year, when Ross wrote a letter to Senate Minority Leader Charles E. Schumer of New York saying the agency ‘intends to establish’ a standard.

Delgado asked Ross in the hearing Wednesday whether his agency intended to set an MCL for the chemicals. Ross responded that he could not say one way or the other until the EPA’s regulatory determination process was complete.

‘It sounded like a backtrack,’ Delgado said after the hearing. ‘I was surprised by (Ross’) testimony. I thought there would be some level of commitment to providing an MCL and it seemed like he was not willing to make that commitment today.’