Farmers losing everything after ‘forever chemicals’ turned up in their food 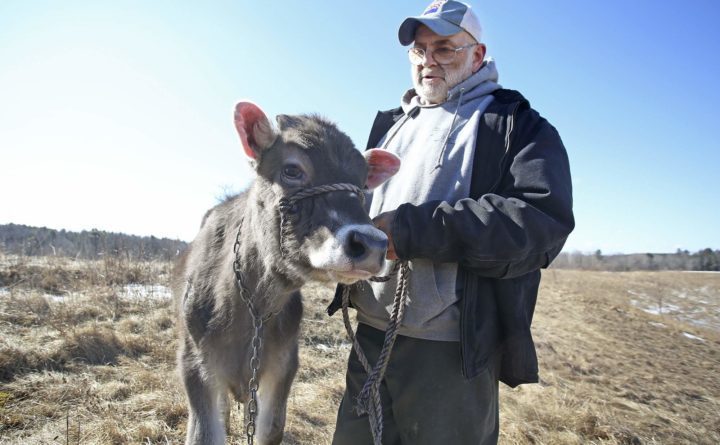 “’Forever chemicals’ linked to cancer are turning up in farm produce across the country, leading farms to lay off workers, incinerate cranberry harvests, kill cows, and dump thousands of gallons of dairy milk.

Such long-lived ‘fluorinated’ compounds have been measured in the drinking water in over 600 locations in 43 states, near factories or military bases that use them in firefighting foams. Best known as PFAS chemicals (short for per- and polyfluoroalkyl substances), they line numerous waterproof consumer goods, from hiking shoes to pizza boxes.

Now their emergence in farm produce has spurred state and federal agencies to ramp up efforts to test for the chemicals in a wider variety of foods, and to fund studies to track how the chemicals enter the food supply.

In June, the FDA announced the results of its first tests for PFAS compounds in supermarket staples, including cooked meat, fruit, and iced chocolate cake. The health agency said it did not see a ‘food safety risk’ in its sampling and did not find PFAS chemicals in most foods. But it did report PFAS in milk and produce that had been farmed near polluted locations. While researchers at the National Institutes of Health and CDC are still studying the health effects of the chemicals, some are known to hinder growth and learning in children, lower chances of pregnancy, and increase the risk of cancer.

‘They’ve ruined us,’ Fred Stone, a Maine farmer who stopped selling milk after PFAS chemicals turned up in it in 2016, told BuzzFeed News. At his Stoneridge Farm in Arundel, the suspected source is PFAS-laced sludge that Stone had spread on his fields as fertilizer, a practice the state has permitted many farms to do. The milk tested at 690 parts per trillion for PFAS, nearly 10 times the Environmental Protection Agency’s guidelines for two of the chemicals. More than two years on, Stone and his wife still take care of their remaining 60 cows but can’t sell their milk. Stone estimates he’s spent some $10,000 on tests and is losing over $400 daily. ‘Our assets are our livestock and our farm, and … we’re nothing now. And this is an operation that goes back 100 years,’ Stone said.

Well beyond Stoneridge Farm, Maine state officials are grappling with contaminated sludge on farms. The Maine Department of Environmental Protection tested 44 samples from other farms and compost facilities, for example, the Intercept reported last month. The agency detected at least one PFAS compound in every sample.

Last week, the state reported the first results of statewide milk testing: Three farms that had also used possibly contaminated sludge did not show detectable levels of PFAS in the milk. Also, the Maine Department of Agriculture, Conservation and Forestry tested 26 samples from retail milk bottled or sold in Maine, including Horizon Organic, HP Hood, and Cumberland Farms Dairy Pure brands, and announced that all fell below the state’s detection limit…

But Patrick MacRoy of the Maine-based nonprofit Environmental Health Strategy Center told BuzzFeed News that the state’s results were wanting: First, he said the state’s detection limit of 50 parts per trillion was too high. Second, the state needed to test many more farms that used PFAS-laden sludge. And finally, retail milk is typically a mix of milk from many dairies, so problematic milk would be diluted and might escape detection.

‘The state needs to actually go out and test all the farms that have a history of sludge use,’ MacRoy said. ‘That’s the only way we’re going to understand where the hot spots are and where the farms are unknowingly producing contaminated milk.’

Across the country, a New Mexico farm with heavily contaminated milk now has the attention of the FDA and the USDA. Without naming the farm, the FDA’s June announcement included tests near a site in Clovis — and the agency reported that it found the chemicals in the milk, as well as in the cheese.

Around the time of those tests, dairy owner Art Schaap of Clovis told Search Light New Mexico that he was dumping 15,000 gallons of milk daily and was looking to euthanize 4,000 cows after the Air Force found sky-high levels of PFAS in his water last year, some 171 times the EPA’s health advisory level of 70 parts per trillion. Cannon Air Force Base is a short drive from the dairy farm.

In March, the USDA began two studies of PFAS in cows from Schaap’s herd; the agency will analyze blood, plasma, and tissue samples from some 120 cows, to calculate how PFAS levels in water translate to PFAS levels in milk and meat.

‘Right now we can sample the blood, but we don’t know how that correlates to levels in the meat at all,’ Shanna Ivey, professor of animal science at New Mexico State University, who is working with the USDA, told BuzzFeed News. The university is working with 10 live cows from Schaap’s farm to study how long it takes for PFAS to leave the animals once they start drinking water without PFAS compounds in it.

Ivey said the results will be shared with the FDA and the USDA’s Food Safety and Inspection Service and its Agricultural Research Service. ‘Any area that has an Air Force base which has agriculture co-located is going to be facing similar problem,’ she said.

So far, no federal agency has put a legal limit on PFAS compounds in food — the EPA’s levels are merely guidelines, Ivey pointed out. But that hasn’t stopped businesses from rejecting Schaap’s dairy products or food from contaminated sites elsewhere.

In Massachusetts, for example, Ocean Spray rejected cranberries from a PFAS-contaminated bog on Cape Cod for two years running, despite state and FDA teststhat failed to detect PFAS in the fruit, according to meeting minutes from a local PFAS remediation group that included local government and military officials. The cranberry crop was incinerated. (Massachusetts is the number two producer of cranberries in the US after Wisconsin.)

The Massachusetts Department of Environmental Protection tested affected cranberry bogs in 2016, 2017, and 2018, and almost no cranberry samples had detectable levels of PFAS.

In an early sign of the economic effects of PFAS, Venetucci Farm near Colorado Springs stopped all agricultural production and let go of staff after PFAS chemicals were discovered in 2016 in the water used by the property, linked to firefighting foams used at Peterson Air Force Base…

Private tests of the farm’s produce shared with BuzzFeed News showed that the compounds had infiltrated almost every type of food tested, including spinach, garlic, and carrots, as well as eggs, pork, and beef from cows raised on the property.

Ultimately, any potential health risks from consuming the tainted food would depend on how much a person ate and how frequently, Christopher Higgins, a civil engineering professor at the Colorado School of Mines, told BuzzFeed News by email.

‘The primary takeaway from the Venetucci data is that it is not far-fetched for these chemicals to end up in a wide variety of foods at measurable amounts at PFAS-impacted sites,’ Higgins said. He is part of a research team that won an EPA grant to study the extent to which PFAS compounds accumulate in food. ‘It’s one thing to show it in a greenhouse or even in a controlled experimental plot (as we did), it is another to see some chemicals show up in food that people are actually eating,’ he said.

It’s possible other farms in the area are affected, but owners in every state are now wary of testing for the chemicals…”