Geologists study Clarendon Gorge to map the spread of PFAS 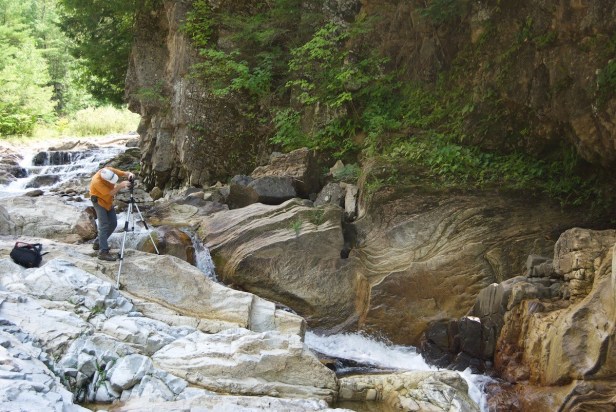 “CLARENDON — On a summer day in 2018, Mike Nahmias had a realization while eating lunch at a scenic spot overlooking the Clarendon Gorge, several hundred yards south of the Rutland-Southern Vermont Regional Airport.

Sandwich in hand, it occurred to Nahmias that geologists might be able to analyze the exposed rock in the gorge’s curvatures and crevices, then determine how hazardous chemicals are traveling through the aquifer to the drinking wells of nearby residents.

Nahmias, a hazardous site manager for Vermont’s Waste Management and Prevention Division, was visiting the airport that summer because the state had recently sampled nearby wells and discovered high levels of the toxic chemical group PFAS.

He reached out to Jon Kim, the leading scientist with the Vermont Geological Survey, who was involved with remediation work after widespread PFAS contamination was discovered in Bennington.

‘I said, hey Jon, on one of your trips coming back from Bennington, you should take a look at this gorge,’ Nahmias said. ‘I’m not a geologist, but I’m pretty sure I’m looking at a picture of what’s going on beneath the airport.’

The state knew to test the wells in Clarendon after finding PFAS contamination in a groundwater collection trench near the Vermont Air National Guard base in South Burlington in 2016.

Like the Guard base, the Southern Vermont airport has used aqueous film-forming foam as a firefighting agent; it contained PFAS until the U.S. banned manufacturing the foam with the chemicals in the early 2000s.

For each instance the foam was used, Nahmias identified where the foam leached from the runway into the surrounding landscape, down into the aquifer, and eventually into wells.

‘I think we’re up to 90 wells we’ve sampled,’ Nahmias said. ‘We’ve got it pretty much bound in; we know where the impacts are.’

Kim said the chemicals are extremely effective fire retardants. For the same reason, they take a long time to break down, and are often called ‘forever chemicals.’

‘They’re designed for that,’ he said. ‘But unfortunately, because they’re all carbon and fluorine bonds, which are the strongest bonds in organic chemistry; they don’t degrade.’

Two years after Nahmias’s lunch by the river, a full-fledged geological team is making weekly descents into the gorge to take measurements, photos and videos. Last fall, drone operators from the Vermont Department of Transportation — whose Unmanned Aircraft Systems team is coincidentally located at the Southern Vermont airport — took overhead videos of the Mill River, which runs through the gorge.

Scientists now spend every Friday at any of several spots on the banks of the Mill River, alongside residents who frequent the area’s popular swimming holes (which have been declared safe from contamination), peering into cracks in the rock and observing the way geology affects the river’s movement.