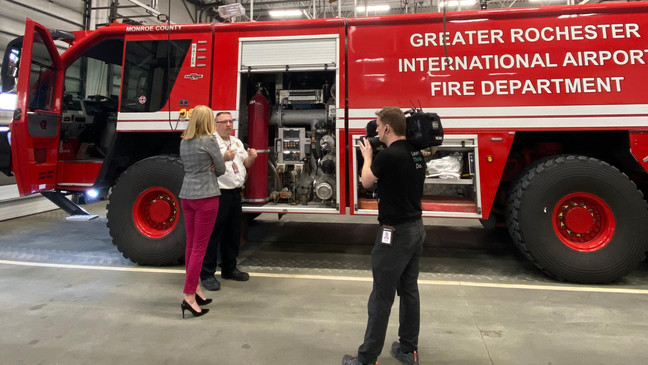 “ROCHESTER, N.Y. (SBG) – Firefighters at as many as 500 airports across the United States are being forced to battle more than just the danger of a potential fuel fire. They’re still using a toxic foam with links to cancer to handle aircraft fires. And because of a federal mandate, Spotlight on America found they likely won’t have an alternative option for potentially years to come.

From a perch just off the runway at the Greater Rochester International Airport, a specialized firefighting crew stands at the ready, prepared and uniquely equipped to handle a plane in distress. Their role is like any other crash truck at any airport in the country, says Paul Miller, president of the airport firefighters union, IAFF Local 1636. The key to killing a fuel fire, according to Miller, is foam. And hundreds of airports across the country use a special kind, aqueous film-forming foam, known as AFFF.

That foam is widely used not just at airports but also by the U.S. military because of its effective, fast extinguishing capabilities. But there are concerns related to a toxic set of chemicals contained in the foam called PFAS, which Spotlight on America revealed has tainted water at military bases, prompted a potentially multi-billion-dollar Department of Defense clean-up effort and the creation of a task force to address solutions. It’s still being used by airport firefighters, with many worried the foam they count on to save lives, potentially putting theirs at risk. Miller explained, ‘I’m counting on it to do the job it’s there for. I shouldn’t have to worry about the secondary effects of this foam.’

The effects Miller is referencing are related to health. PFAS chemicals, according to studies, have a link to certain kinds of cancer as well as other health problems. Captain Kevin Bardeen, who recently served as the chief of the department at the Rochester airport, told Spotlight on America crews there now treat the foam-like hazmat material, ‘Now that we’ve realized there’s a danger to it, we’ve gone to an emergency use only’…”