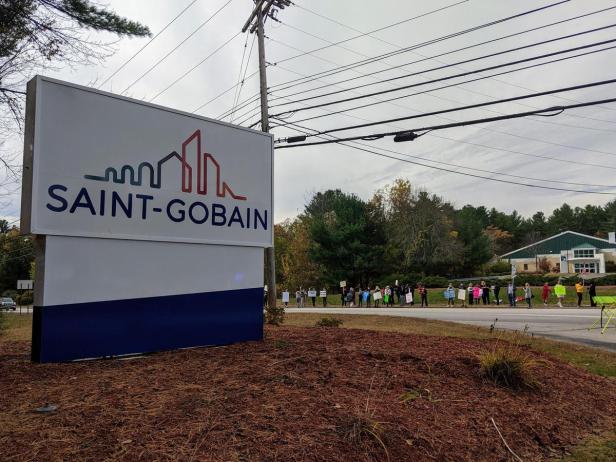 “After years of efforts to address toxic chemical emissions from the Saint-Gobain plastics factory in Merrimack, New Hampshire and the town are separately suing the company for delays in the installation of a required treatment system.

The lawsuits filed this week in Hillsborough Superior Court focus on air emissions of harmful PFAS chemicals, which have settled into drinking water serving hundreds of homes in the area.

Lawyers for the state and Merrimack are seeking injunctions as soon as possible to shut down the factory until a required upgrade is installed or emissions are otherwise controlled. The state attorney general’s office wants to impose the maximum civil penalty of $50,000 a day until that happens.

‘They really need to cease operations,’ said Merrimack town council vice chair Bill Boyd. ‘In the grand scheme of things, I just want Saint-Gobain to be a good corporate partner to the town.’

Saint-Gobain’s North America CEO Mark Rayfield said in an interview that the lawsuits send a discouraging message to the factory’s 200 workers. He said the company ‘has never stopped working’ on the required emissions upgrades, which they hope to complete this summer.

PFAS are a large family of industrial compounds that persist in the environment and have been linked to serious health problems, including high cholesterol, kidney and liver disease, immune and reproductive deficiencies and developmental delays.

The chemicals form protective coatings and were once a key ingredient in Teflon. Saint-Gobain says it hopes to eventually phase out its use of PFAS, but hasn’t gotten all the way there yet. The compounds are not federally regulated, and New Hampshire has limits on only four types.

Saint-Gobain first reported elevated PFAS emissions to the state Department of Environmental Services in 2016. This led to a consent decree, with the company paying for bottled water, new infrastructure and treatment on hundreds of contaminated wells in Merrimack, Litchfield and Bedford.

Since then, New Hampshire has introduced some of the country’s strictest limits on four kinds of PFAS, including in groundwater, where air emissions are deposited and build up over time.

Last year, the state gave Saint-Gobain a temporary air permit that required it to curtail further air emissions of PFAS with the ‘best available control technology’ – in this case, a $4.4-million-dollar smokestack upgrade called a regenerative thermal oxidizer, a kind of incinerator.

The deadline for the installation of that system was Feb. 11 of this year. Saint-Gobain sought an extension last fall, but the state denied it, saying it would put public health at risk. The company continued to report to state and local officials that it would not meet the deadline…”