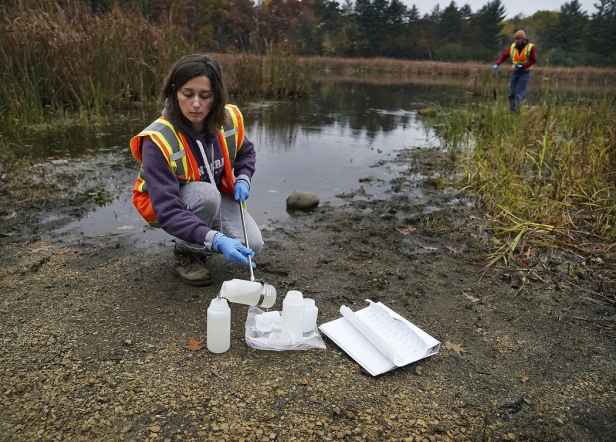 “State regulators will ask a wide swath of businesses, manufacturers, landfills and municipalities to start monitoring for a class of industrial chemicals known as PFAS, a major health and environmental threat across the country.

The results could offer one of the most comprehensive understandings yet of exactly where PFAS contamination is still coming from. The substances, known as ‘forever chemicals,’ do not break down in the environment.

Monitoring would begin sometime this winter, said Katrina Kessler, commissioner of the Minnesota Pollution Control Agency (MPCA), which announced its monitoring plan on Tuesday. The agency will accept public comments on the plan until Dec. 20 and could potentially revise it.

The monitoring will focus not only on finding and reducing PFAS contamination in rivers and lakes, but also identifying sources of air, soil and groundwater pollution, Kessler said.

‘It is a statewide challenge,’ she said.

Monitoring would be voluntary, for now. The MPCA will ask several hundred businesses and municipalities to work with the agency to start testing for PFAS — per- and polyfluoroalkyl substances — some of which cause cancers, thyroid problems and hypertension. If the voluntary monitoring doesn’t work to identify and reduce pollution, Kessler said the agency will pursue mandatory regulations.

‘We are trying to work in partnership, but if necessary we will take action,’ she said.

The compounds, prized for their water and stain resistance, have been used since the 1950s in untold numbers of consumer products such as cellphones, mascara, brake fluid and even hospital gowns. They were common in firefighting foam used in airports and military bases.

The chemicals were pioneered by Maplewood-based 3M Co. The company struck a deal in 2018 to pay the state $850 million to settle a lawsuit over the contamination. But the sources of PFAS pollution now extend well beyond one company.

As a pollutant, the compounds not only never break down, but they’ve also spread to every corner of the globe and have been found in Arctic polar bears as well as in local food wrappers and lettuce. There is a global movement to restrict use of all PFAS.

The MPCA will ask nearly 200 companies and manufacturers considered to be the most likely sources of PFAS pollution to begin testing. It will also ask dozens of municipal wastewater treatment plants and landfills that serve as conduits of the pollution to test for it. Those businesses and municipalities would pay for the costs for testing.

The state has also been expanding its own testing for several years, finding dangerous concentrations of the compounds leaching into rivers and groundwater downstream of wastewater treatment plants and landfills.”…