Pentagon will test firefighters’ blood for PFAS. But then what? 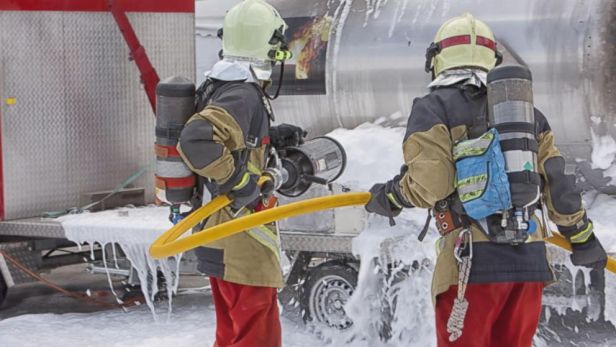 “Starting this fall, the Department of Defense will test every military firefighter’s blood for a class of chemicals tied to health problems. But the testing leaves out veterans, and the results may be of little use for individuals.

One of those veterans, former military firefighter Dan Casson, was surprised to be diagnosed with multiple kinds of cancer six years ago.

There was malignant melanoma and basal cell cancer on his face. He almost lost his ear. And a prostate cancer diagnosis came around the same time.

His doctors at first blamed too much sun exposure for the skin cancer, but Casson disagrees. ‘I was never a sun worshipper,’ he said. Instead, he blames chemicals he was exposed to on the job.

Firefighters for decades put out flames using aqueous film-forming foam, or AFFF, which contains per- and polyfluoroalkyl substances. PFAS have been tied to health problems including cancer.

Legislation passed last year mandates that military firefighters receive blood tests for PFAS beginning this fall, but retired firefighters and dependents aren’t included. Meanwhile, there’s no standard for how much PFAS in the blood is too much.

Casson, of New Port Richey, Fla., enlisted in the Air Force Reserve in 1975. While training as a firefighter at Chanute Air Force Base in Illinois for eight weeks in the ’70s, he put out fires using AFFF.

Casson, now 70, said he is ‘100%’ convinced that PFAS in the foam led to his illnesses since he has no family history of these cancers and was ‘drenched’ in AFFF while at Chanute.

He has never been tested to determine how much PFAS is in his blood.

Sen. Jeanne Shaheen (D-N.H.) proposed adding a provision to the fiscal 2021 NDAA that would extend blood tests to former service members like Casson and their families, but the provision didn’t make it out of committee.

A Shaheen spokesperson said the senator will look for other avenues to advance legislation, including conference negotiations for the fiscal 2021 NDAA.

The House passed a provision in its version of the fiscal 2021 legislation to guarantee service members won’t pay for a PFAS blood test.

Such testing would be a step toward finding out how pervasive the chemicals are in service members’ blood overall, but legislation so far has not set standards for what PFAS levels should be…”