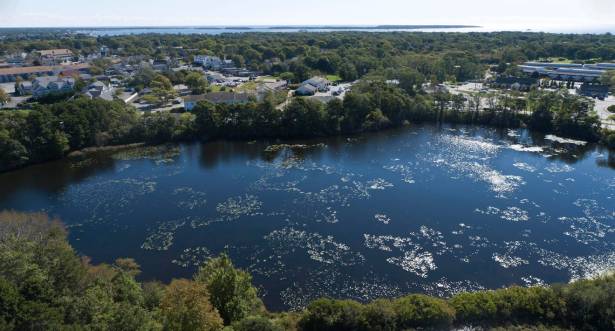 “In July 2020, Tom Cambareri dragged his kayak to the shore of Aunt Bettys Pond in Barnstable. He paddled out to the middle and dropped his sampling equipment into the water.

Cambareri, a hydrologist and the founder of Sole Source Consulting, was on a mission for the town of Barnstable. His goal was to better map the landscape of PFAS contamination in the town’s surface water bodies as the search for new sources of drinking water to meet rising demand intensifies.

Cambareri ultimately collected water samples from 21 water bodies in town, according to a report he produced in December 2020.

The results from lab tests of those samples showed PFAS compounds were present in every water body tested, with some registering PFAS levels far above the state standard for drinking water. There is no standard for PFAS contamination insurface water bodies, such as ponds and creeks.

PFAS, or per- and polyfluoroalkyl substances, are a group of thousands of manmade chemicals linked to health problems ranging from immune system issues to cancer. The chemicals remain essentially unregulated at the federal level, but some states, including Massachusetts, have begun to put safe drinking water limits on a few of the more well-researched compounds.

In 2020, Massachusetts instituted a drinking water standard of 20 nanograms per liter for a group of six PFAS compounds, which are now known as the PFAS6.

Cambareri tested for 18 other PFAS compounds that haven’t yet been regulated by the state or federal government.

Laurel Schaider, a senior scientist at Silent Spring Institute, where she leads the institute’s water quality research on PFAS, reviewed Cambareri’s report at the Times’ request.

‘I think this is a really important report,’ Schaider said Friday. ‘It’s a reminder of the interconnectedness of groundwater and surface water on the Cape. Given what we know about the high levels of PFAS reaching the drinking water wells in Hyannis, it’s not surprising that the ponds in those same areas have similar levels of PFAS.’

Cambareri said in his reportthat, as the town considers new sources of drinking water, it should rule out places where PFAS contamination is known to be present in nearby surface water bodies.”….