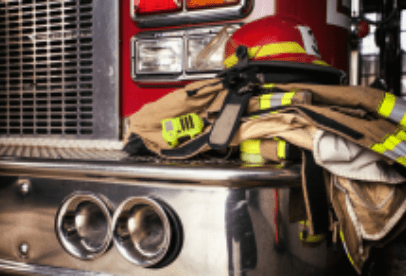 “WASHINGTON – A new study heightens concerns about firefighters’ exposure to the fluorinated ‘forever chemicals’ known as PFAS: Nearly 99 percent of the fluorine found in tests of dust from inside fire stations likely came from unknown PFAS chemicals that could not be identified as ones that researchers had tested for.

The study by researchers from Notre Dame and Harvard, published in the peer-reviewed Journal of Exposure Science & Environmental Epidemiology, measured 24 PFAS and total fluorine in dust from 15 fire stations. About 60 percent of the stations no longer used PFAS-based firefighting foam, also known as aqueous film-forming foam, or AFFF. The others used AFFF very rarely.

‘What are these unknown PFAS?’ Andrews said. “Why were the levels higher in the firefighters’ gear lockers and apparatus bays? The turnout gear used by firefighters may be a more important source of PFAS exposure for firefighters than previously known.”

Some PFAS chemicals, including PFOS in firefighting foam, have been linked to serious health hazards, including cancer, reproductive and developmental harms, and reduced effectiveness of vaccines, and is found in the blood of virtually every American. But studies show that firefighters tend to have even more PFAS in their blood. One reason is that the PFAS that makes their turnout gear waterproof is also leaching into the inner layers of their coats.

The dust samples from turnout gear locker areas had higher levels of several PFAS than the dust from the station living areas, and those PFAS were also detected on the turnout gear, based on the wipe samples…”