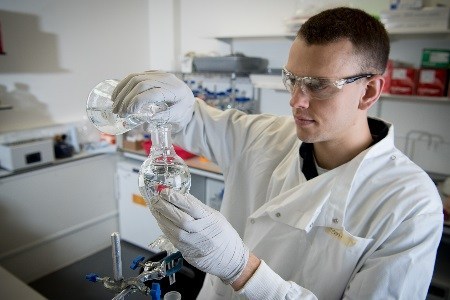 “Like many companies incorporated in Delaware, Framergy doesn’t have offices or employees located within the state’s borders. But the technology they’re developing could have a big impact on cleaning up a group of chemicals that are becoming a big concern in Delaware and lots of other places.

In July, tests at Dover Air Force Base showed four wells east of the base had PFAS levels higher than the EPA’s standard of 70 parts per trillion. Sometimes called ‘forever chemicals,’ these manmade perfluoroalkyl and polyfluoroalkyl chemicals don’t break down in the environment and can accumulate over time…

The EPA is funding Framergy’s research into a way to remove PFAS contamination. The company was founded in 2011 out of Texas A&M University. Its technology focuses on something called metal-organic frameworks, or MOFs. The MOFs have an incredible surface area — a MOF the size of a penny could be unwrapped to cover an entire football field.

‘That‘s useful because it allows us to tune the materials to be molecularly specific to pick out one molecule over another,’ said Jason Ornstein, Frarmergy president. Because they can be tuned to catch specific chemicals, MOFs are able to target and capture PFAS in the environment, he said…

But Ornstein said Framergy’s MOFs go beyond just capturing PFAS. ‘What we proposed was not only the capture but also the improvement of the materials so that you wouldn’t have to dispose of them,’ he said. The MOFs use UV light to actually break down the PFAS chemicals. ‘Hopefully you’re using just natural sunlight — UV rays — to catalyze and break it down into less harmful components,’ Ornstein said.

Last month, the EPA awarded Framergy a $100,000 grant through the Small Business Innovation Research program. The company is currently working on understanding how wastewater is collected and deposited in the soil so they can develop an engineering solution to apply their chemistry to actually doing the work of removing PFAS chemicals. They’re testing the technology at the Firefighter Recruit Academy in College Station, Texas.

‘The SBIR will be part of the process of taking the known chemistry and then building an engineering platform around that in which to go into an Air Force base or go into a firefighter training facility and clean it up,’ Ornstein said.

The EPA says PFAS can cause reproductive and developmental, liver and kidney effects, and problems with the immune system in laboratory animals.”