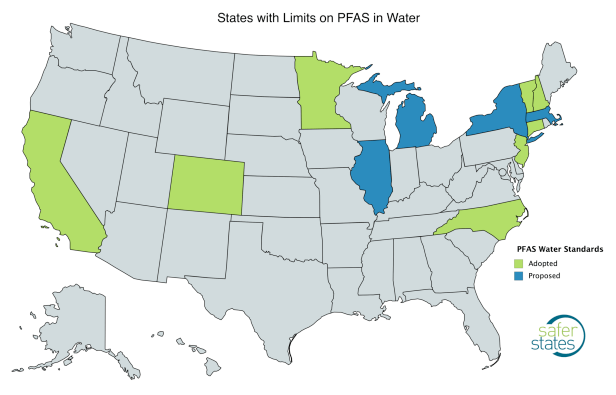 “A new report shows states are stepping up to protect public health from harmful chemicals.

An analysis by Safer States, a nonprofit advocacy group that focuses on chemical issues, finds at least 29 states will consider more than 180 policies to require companies to disclose what is in their products as well as limit exposures to toxic chemicals. That includes bans on PFAS, which has shown up in drinking water supplies in communities around the Northeast. The chemical is used in food packaging and firefighting foam.

Safer States strategic director Gretchen Salter says states rather than the Environmental Protection Agency are taking the lead during the Trump era.   ‘News about widespread PFAS contamination in drinking water and soil and sewage sludge has really spurred a number of states to take action on PFAS and limiting it in a number of different products. We’re also hearing more about the chemicals that are used in plastics and flame retardants and electronics. And all of this information has spurred legislators to take broader action for the sake of public and environmental health.’

Bobbi Wilding, deputy director of Clean And Healthy New York, says right now most consumers are unknowingly playing a guessing game…    ‘Because most materials, most things people go to buy, don’t contain labels that are complete or accurate. So even the clothes that you buy might say 100% cotton, but it won’t tell you about the dyes that are used. It won’t tell you about the button materials for the buttons, things like that. And that’s true for just about everything that you purchase. Right? So everything we’re bringing into our homes sort of has a question mark on it. So the first step is really getting information, getting disclosure from companies to tell us what’s in their product, and then as we realize what chemicals are present, setting limits and saying ‘no you can’t use harmful chemicals in products that are coming into people’s homes.”

Salter adds New York, Vermont, New Hampshire, Connecticut and California are moving forward with PFAS legislation that addresses one or multiple uses of the chemicals.   ‘About 21 states right now are considering limits on PFS in drinking water, as well as policies to hold polluters accountable for their mess. Taxpayers are paying a lot of money to clean this up and states are now trying to make sure that polluters are held responsible for cleaning up their mess and not taxpayers. We’re seeing a lot more of those policies being introduced and passed this year as well’…”