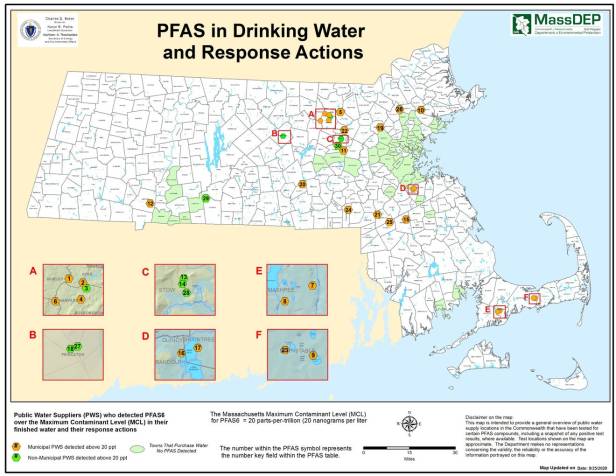 Read the full article by Wheeler Cowpertwaite (The Patriot Ledger)

“One of the three water sources for the Abington/Rockland Joint Water Works has been testing above the state limit for PFAS, which are also called ‘forever chemicals.’

The chemicals are man-made and have been used in a variety of applications since the 1950s, from nonstick cookware and water-resistant clothing to food packaging materials and firefighting foam. They are considered ‘forever chemicals’ because they don’t break down and can accumulate in the body.

Water from the Hingham Street station in Rockland tested at an average of 23 parts per trillion in the first quarter of the year, 20 in the second and 24 in the third.

Water Superintendent Joe LaPointe said the town had been adding powdered carbon to the water to try to take out the PFAS, but it wasn’t working and the Department of Environmental Protection has allowed them to stop the practice. Instead, they will have to move to granulated activated carbon filters.

‘We thought the powdered carbon was working, but as the months went on, we realized our samples were all over the place,’ he said.”…