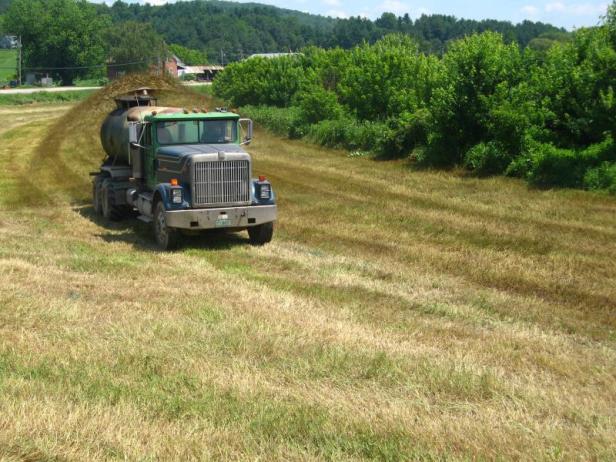 “The long-standing practice of spreading treated sewage sludge and septage on farm fields has contaminated groundwater in some areas with PFAS, recent sampling shows.

The discovery has prompted a state agriculture official to say that a prohibition on harvesting feed and crops from those fields may be needed, And it has led a coalition of environmental groups to call on the state to test for PFAS levels in biosolids before they are spread on fields.

After seven out of 34 land application sites in Vermont were found to have PFAS levels above state groundwater standards, the state Department of Environmental Conservation is considering measures to prevent future contamination.

Vermont wastewater treatment plant operators and septic companies must dispose of the residual end products somewhere, and their options are limited. With tight capacity at southern New England incinerators, they can send it to a landfill or to a processing plant in New York, or spread it on fields as fertilizer.

Sludge and septage to be spread on fields must be treated to EPA standards to reduce pathogens and limit heavy metals, and are called ‘biosolids.’ Critics have argued those standards do not address the thousands of chemicals that now show up in human waste, like pharmaceuticals and PFAS.

Per- and polyfluoroalkyl substances, or ‘PFAS,’ gained notoriety in Vermont after the state discovered in 2016 that a particularly toxic form of the chemical had contaminated hundreds of drinking water wells around two former ChemFab factories in Bennington. That discovery prompted the DEC to start widespread sampling to better understand other potential sources of PFAS drinking water contamination.

Last fall the state began requiring wastewater plants and septic companies to test soil and groundwater for PFAS levels at fields where biosolids are spread.

‘We found a couple fields were fine, and we found a couple that were pretty high,’ Chuck Schwer, director of the waste management and prevention division for DEC, said of the initial sampling. ‘So we felt it was prudent to then require all the permittees to sample their fields.’

The ‘really good news’ from the expanded testing is that no drinking water wells within a quarter mile radius of the fields have elevated PFAS levels, Schwer said.

But the municipalities of Bradford, Essex Junction, St. Johnsbury, Woodstock, and private company P&P Septic Services, all had had one or groundwater samples at fields where they spread biosolids come back with elevated PFAS levels. (Vermont’s groundwater enforcement standard for PFAS is a combined 20 parts per trillion for five of the compounds.) Those entities will now have to pay for further sampling todetermine the extent of the contamination and if cleanup work is needed, said Schwer.

Schwer hopes that Vermont’s lawsuit against DuPont, 3M and other PFAS manufacturers will result in some funding that could help municipalities pay for this kind of work.

‘But that’s a long way down the road, and there’s no guarantee we’ll be successful,’ he added…”