Thousands of gallons of toxic foam used at Luke Air Force Base for more than 40 years. Here’s what it means for our water 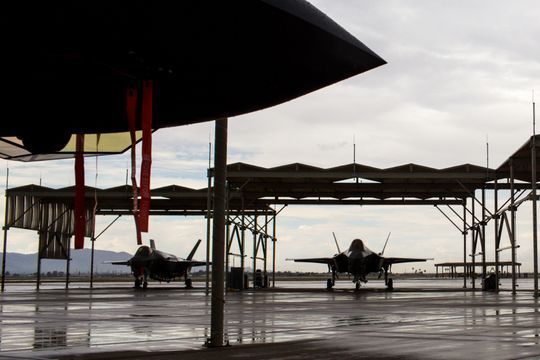 "Luke Air Force Base used a toxic firefighting foam to put out at least 10 jet crash fires and suppress many more controlled fires in training activities in the last half century, according to a U.S. Air Force report.

Overall, thousands of gallons of the foam may have seeped into the groundon the base in far west Glendale that trains fighter pilots.

The 2015 report reveals that the base has known for years that these practices may have contaminated its water supply. But the base only phased out use of the foam in the last couple of years, and only spread the word on Wednesday when it was done testing on the base.

While Luke’s drinking water is safe, the groundwater on base is contaminated past EPA advisory levels, and now the Air Force will start testing wells around the base to see how far the chemicals, perfluorooctane sulfonate (PFOS) and perfluorooctanoic acid (PFOA), spread.

Just because Luke’s drinking water is safe doesn’t mean that the chemicals didn’t make their way into other public or private wells off base.

A water quality expert in the state warns that part of the reason these chemicals are so concerning is because they spread so easily and stay around for so long.

Meanwhile, West Valley leaders and city officials are trying to put out the message that their water is safe to drink, and there’s no reason for residents to be concerned.

Luke began to use the toxic foam — called aqueous film-forming foam, or AFFF — to fight fires in 1972, according to the 2015 Air Force report, which documented the base’s use of AFFF over the years.

The foam was located in fire trucks, fire stations, hangars and storage areas across the base.

It was used in 13 emergency responses to suppress fires and fumes from fuel spells, including:

Each time, Luke used between five and 100 gallons of the foam.

It’s possible the chemicals went into the environment in all but two of those cases, according to the report…

Luke used the foam in training at two sites on the base from 1972 until 2000, according to the report.

At one training site that was operational for 27 years, it’s estimated that foam ‘likely infiltrated the surrounding ground surface because the area is characterized as extremely flat with little or no topographic relief,’ according to the report.

There was potential groundwater contamination at both sites.

PFOA and PFOS are in many different products, including household products such as stain- and water-repellent fabrics, nonstick pans and paint.

The firefighting foam the Air Force used is highly effective at putting out jet fires.

Even though Luke and other bases may have stopped using the old foam, the chemicals linger in the ground under the base, and potentially elsewhere.

When the foam seeps into the ground, it can over the years filter through the soil and reach the aquifer.

These chemicals are in a class of chemicals that are known to be ‘very mobile and very persistent in the environment,’ said Joan Card, an attorney at Culp & Kelly who was director of the Arizona Department of Environmental Quality’s Water Division from 2005 to 2009.

‘So they move, and they stay,’ Card said.

Because the chemicals don’t break down, they have been nicknamed ‘forever chemicals.’

Once in an aquifer, the contaminants can then continue to travel and reach wells people use for water supply, whether it’s public or private wells used for drinking water or irrigation, Card said.

Luke will be requesting permission to test private wells in Glendale, Goodyear and unincorporated areas within a 1-mile radius of the base. If it finds contamination there, it will search farther out.

In some states, the county is stepping up to do this, she said. Luke isn’t the only military base affected.

Communities across the country have been attempting to ensure its water supply is safe as the military has tested bases across the United States. In March 2018, the Department of Defense said it had so far identified 24 military drinking-water systems where the contaminants exceeded EPA’s advisory level, and 90 sites where groundwater exceeded the advisory level.

The Air Force has helped provide solutions to these communities, which will happen at Luke if there is a need.

The treatment techniques for these chemicals are more complicated than filtration, Card said.

Even if there aren’t issues with drinking water, there could be other issues, Card said, such as if a contaminated water supply is used for farming.

‘Any water supply use could be impacted,’ she said…"