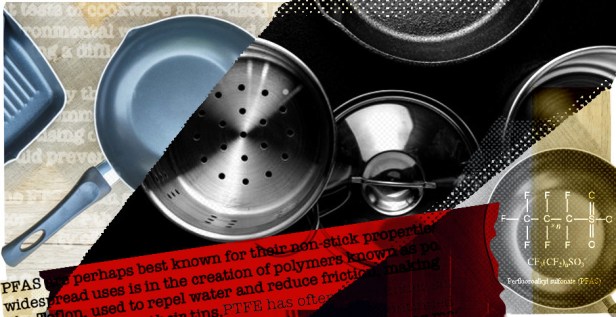 “Consumers trying to avoid toxic chemicals in their nonstick cookware face convoluted advertising claims that can confuse even the most well-informed buyers.

Take Diana Zuckerman, who, as president of the National Center for Health Research, is more familiar than the average person with chemistry and toxicology. Still, she said, trying to determine which pans and cookware did not contain per- and polyfluoroalkyl substances (PFAS), a class of toxic substances linked to cancer and other health problems, was no easy task.

‘I, like many consumers, was fooled by all the promotional statements made about many types of cookware,’ she said. ‘You shouldn’t need a doctorate to figure out what cookware is safe.’

But there’s limited oversight or enforcement of misleading marketing claims related to chemicals, with critics arguing the nation’s consumer protection system — which includes the Federal Trade Commission and the Better Business Bureau — is ill-equipped to handle them.

That’s despite test results conducted by an environmental watchdog showing cookware advertised as ‘free of’ various kinds of PFAS often contained other types of the chemicals, thereby creating a difficult landscape for environmental- and health-minded buyers to navigate.

‘The FTC is gun shy; I wouldn’t expect much of them,’ said Rena Steinzor, a former attorney for the agency who now teaches food safety and regulatory law at the University of Maryland.

PFAS are perhaps best known for their nonstick properties; one of their most widespread uses is in the creation of polymers known as polytetrafluoroethylene (PTFE), like Teflon, used to repel water and reduce friction, making it easier to flip fried eggs and release cakes from their tins.

PTFE has often come under scrutiny because it once was made using a PFAS called PFOA, which was discontinued in the United States years ago after being linked to cancer and other negative health effects. Now, American PTFE is produced using other types of PFAS, many of which have not been fully studied.

It is unlikely consumers would be exposed to dangerous levels of the chemicals from their cookware. But advocates argue PFAS do pose health dangers for manufacturing workers, as well as communities surrounding factories that have polluted groundwater. Because PFAS can remain in the environment for years, there are also questions about how to safely dispose of products containing the chemicals without contaminating additional areas.

As a result, environmentally minded consumers have increasingly sought cookware that doesn’t contain the chemicals. When they do, they are confronted by an alphabet soup of advertising claims, many of which can be misleading.

Late last year, the Ecology Center tested 24 nonstick products and found 79% of cooking pans and 20% of baking pans were coated with PTFE — despite many companies advertising those products as PFOA-free.

Items tested by the Ecology Center included products made by Cuisinart and Cooking Concepts, among other brands.

In the most extreme example, the Ecology Center found that the Ozeri stone Earth frying pan was made with PTFE despite it being marketed as ‘absolutely free of toxic substances such as APEO, GenX, PFBS, PFOS, PFOA’ — some of the more researched and controversial PFAS.

In another instance, PTFE was found on a pan by Sunkitch Hotsun simply labeled ‘eco-friendly.’

‘Companies often tell us certain chemicals are not in a product,’ said Melissa Cooper Sargent, the Ecology Center’s environmental health advocate. ‘But when they don’t tell us what is in the product, we cannot easily make an informed choice.’

That is what happened with Zuckerman, who realized a few years ago that the cookware she already owned likely contained PFOA. She purchased a new set advertised as PFOA-free, and only later figured out — after hours of research — that it likely contained PTFE instead.

‘No one should have to go through that,’ she said…”