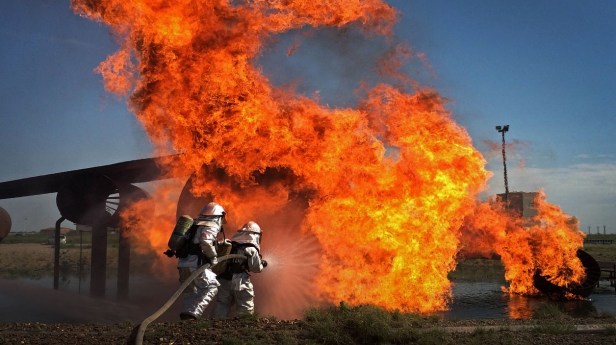 “Academic researchers and the U.S. Air Force have conducted a test using technology that can destroy hazardous chemical compounds in groundwater that are contaminating military bases, surrounding communities and the environment.

The service this week announced it had tested an ‘Enhanced Contact Plasma Reactor,’ capable of destroying perfluorooctane sulfonate and perfluorooctanoic acid — known as PFOS and PFOA — synthetic chemical compounds that are collectively part of a group of polyfluoroalkyl substances, or PFAS.

Tested at Wright-Patterson Air Force Base, Ohio, with partners Clarkson University and GSI Environmental as well as the Air Force Civil Engineer Center, the reactor acts as ‘a closed system utilizing water, electricity and argon gas to degrade PFOS and PFOA in minutes,’ the service said in a news release.

‘The argon gas concentrates PFAS at the gas-liquid interface, and plasma is generated at that interface, which then destroys PFAS,’ said Dr. Selma Mededovic, one of the principal researchers and an associate professor at Clarkson’s Department of Chemical and Biomolecular Engineering…

‘This is the only technology that actually destroys PFAS molecules that has been demonstrated at this scale; it doesn’t just remove them from water,’ added Clarkson’s Dr. Tom Holsen, also a principal researcher, in the release. ‘All of the other demonstrations that we’re aware of remove it from the water through filtration so there is still a PFAS containing waste.’

The Sept. 25 test comes amid Pentagon efforts to find solutions to treat the contamination, which has been linked to birth defects, infertility, developmental delays and some cancers…

The analysts will next conduct a more detailed analysis of the treated water and evaluate ‘further scaling-up of their plasma reactor design.’

The method could have broader applications beyond military bases and may become a commercialized product in the next two years, Mededovic told Military.com.

PFAS chemicals have been found in the drinking water of locations where 19 million Americans reside in 49 states. The Defense Department in 2016 began widespread testing for contamination in drinking water at its facilities.

Last year, the DoD examined 524 installations for PFOS and PFOA, and found 401 with some level of contamination…”