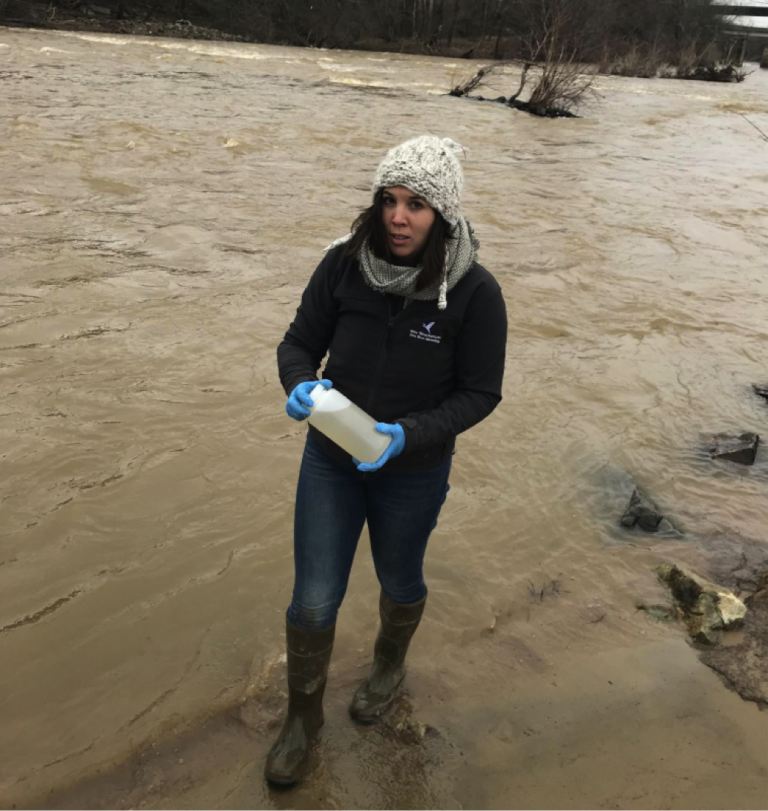 Read the full article by Greg Barnes (The Fayetteville Observer)

“On a windblown day in March, Emily Sutton wore rubber wading boots as she stood on the muddy banks of the Haw River and dipped a plastic sample bottle into the chilly, rushing water.

Sutton, the Haw River riverkeeper, started her morning testing for PFAS at the former mill town of Saxapahaw. Slowly, she wound her way downstream to Pittsboro in her hybrid Toyota Highlander, drawing samples in several stretches of the river along the way.

Sutton had been taking the samples monthly since at least July 2018. That’s the month her samples revealed seven types of PFAS with total concentrations of 1,076 parts per trillion in the river near the old textile community of Bynum, where Pittsboro draws its drinking water.

The concentrations were the highest detected in any North Carolina river since researchers found GenX and a stew of other PFAS compounds dozens of miles away in the Cape Fear River below the Chemours Fayetteville Works chemical plant.

That discovery led to a story in the Wilmington Star-News in June 2017, resulting in an explosion of citizen outcry, the formation of activist groups and the filing of scores of lawsuits against Chemours.

The chemical company eventually entered a consent order with Cape Fear River Watch and the state, agreeing in February of this year to pay $12 million in fines and to keep GenX out of the river, air and groundwater.

It’s been a far different story in Pittsboro, where researchers have identified and documented contamination in the town’s drinking water for decades, but there’s been little done about it and almost no outcry.

Among the first documented studies came in 1985, when an investigation by the Haw River Assembly concluded that ‘the drinking water in Pittsboro was contaminated by industrial pollutants from cities upriver, including Greensboro, Reidsville and Burlington.’

Twenty-two years after that study, a research team led by Mark Stryner of the U.S. Environmental Protection Agency found high levels of PFAS contamination throughout much of the Cape Fear River basin, from Greensboro to just downriver of the Chemours chemical plant in Bladen County.

According to that report, the highest level of PFAS — 942 parts per trillion — was found in the Haw River near where Pittsboro draws its drinking water…

‘In general,’ the report concluded, ‘the indication of a wide variety of PFC (perfluorinated compound) sources indicates that much further work will be required to evaluate this river system and the potential impacts on drinking water sources, wildlife species, and potential human exposures.

‘This study contributes to the growing body of data that suggests that PFC contamination in the waterways of the industrialized world is pervasive and as yet poorly characterized.’

In 2013, another group of researchers, this time led by Detlef Knappe of N.C. State University, returned to the Haw River to conduct more tests.

Knappe’s group had set out to look for bromide, a compound that reacts with drinking water disinfectants to produce toxic byproducts, including trihalomethanes, which can contribute to cancer. They found not only an abundance of bromide, but also high levels of PFAS and 1,4 dioxane, an industrial solvent that the EPA also lists as a probable carcinogen.

In Pittsboro, the research team found the two legacy PFAS compounds — known as PFOA and PFOS — at concentrations exceeding 70 parts per trillion, the level the EPA now considers safe for a lifetime of consumption. Levels exceeding the threshold were found on 57 of 127 sampling days, according to N.C. State University.

Despite all of the studies, the public outcry that began after Knappe’s team of scientists found GenX in Wilmington’s drinking water has not materialized in Pittsboro…

‘The information is out there but maybe it just hasn’t captured the public in the same way as it has with the GenX issue,’ Knappe said. ‘There is no clear bad actor. With GenX, it was clear.’…

This latest [study], led by Duke University researchers Heather Stapleton and Lee Ferguson, aims, in part, to determine the sources of the contamination and the health effects it may be having on Pittsboro’s residents.

The study was made possible by a $495,000 grant from Duke, Stapleton said. It officially began July 1 and is expected to take three years to complete.

In 2017, Stapleton, a professor at Duke’s Nicholas School of the Environment, began a study looking at the high rate of kidney disease in Robeson County.

Stapleton wondered whether the water in Robeson County was making people sick, so she decided to have it tested. She also decided to have her own tap water tested, to use a control for the study.

To Stapleton’s surprise, the test results for her tap water came back high in PFAS, leading her to spend about $400 on a reverse osmosis filtration system for her Cary home. It also led her on a quest to find out where the contamination was coming from.

It didn’t take long before samples taken in Jordan Lake came back positive for certain types of PFAS. Stapleton thinks much of the contamination is coming from the Haw River.

Since its discovery in the lake, Durham, Raleigh, Cary, Apex, Chapel Hill, Carrboro and other communities in the Triangle have found PFAS in their drinking water.

Nowhere are levels as high as in Pittsboro, where concentrations during an October 2018 test revealed five different PFAS measuring a combined 270.8 parts per trillion in finished drinking water. (Subsequent monthly testing through Feb. 16 revealed much lower numbers. The state experienced high rainfall those months.)

Those findings indicate that PFAS in the Haw River can be high, even during high rates of flow.

A report prepared by Stapleton and other researchers seeking the grant from Duke says the ‘levels in Pittsboro are particularly elevated compared to other cities,’ noting that they are ’30 times greater than those in Durham.’…

The discovery of PFAS in the tap water at Stapleton’s Cary home and in Jordan Lake came the year before the legislature approved $5 million for the N.C. Policy Collaboratory’s PFAST Network to study contamination across the state.

The collaboratory-funded team — made up of researchers from seven universities in the state — is now testing surface waters and municipal drinking water across North Carolina for PFAS. It is also testing food and wildlife for the contamination and is conducting many other related studies, including the ability of in-home filters to remove PFAS from tap water in Pittsboro, Durham, Raleigh, Cary, Apex and Chapel Hill.

But no funding was included to evaluate the impact of PFAS exposure on human health, evaluate sources and water-use policies in the Triangle area and to study ways to limit PFAS exposure, according to the report that sought the grant from Duke.

Now that the grant has been approved, Stapleton said, Duke researchers plan to recruit about 30 Pittsboro residents to provide blood and drinking water samples, which will be analyzed for PFAS.

‘These measurements will allow us to model the body burdens of PFAS in residents receiving Pittsboro drinking water,’ the grant request says…

Another aspect of the Duke study will be to predict PFAS levels in drinking water in Pittsboro, Cary and Apex.

Researchers know that much of the PFAS in the Haw River is coming from wastewater treatment plant effluents and stormwater runoff from fields, where sewage sludge is applied to land.

But they don’t know who is producing the contamination.

Many industries discharge their waste directly into sewer systems that flow into the treatment plants, making it extremely difficult to pinpoint the sources.

To combat the problem, the state Department of Environmental Quality has ordered 25 municipalities in the Cape Fear River Basin to begin monthly monitoring for PFAS and 1,4 dioxane. Monitoring began July 1.