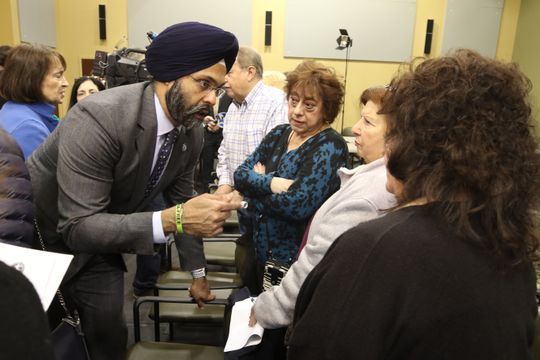 "New Jersey sued chemical giant DuPont on Wednesday seeking financial damages for widespread pollution that contaminated air, soil and water at four sites across the state and endangered the health of thousands, including residents of a Pompton Lakes neighborhood who have had to endure cancer-causing solvents beneath their homes for decades.

Chemours, a DuPont spinoff company, and chemical company 3M are also named in some of the four DuPont lawsuits filed Wednesday in state Superior Court.

‘We’re taking on DuPont and Chemours for contaminating Pompton Lakes,’ Attorney General Gurbir Grewal said, to applause from more than a dozen residents gathered at a news conference in nearby Totowa.

The series showed that DuPont had worked since the 1980s to downplay the extent of contaminationand health risks in Pompton Lakes and then spent years refusing to test hundreds of homes while residents were being exposed to toxic fumes.

‘We allege that DuPont’s leaders knew or at the very least should have known that its actions were contaminating New Jersey’s resources and harming the local community,’ Grewal said. ‘The state has told DuPont since the 1980s to figure out just how far the contamination goes and to clean it up … but DuPont has not lived up to its responsibilities. So today, we’re forcing DuPont’s hand.’

In a statement, Chemours said it was ‘shocked and disappointed’ by the lawsuit, and that the suit appears ‘to be coming out of left field.’ Chemours also said it ‘will defend itself vigorously against these allegations.’

A statement by DuPont said the company had been ‘remediating soil, sediment and groundwater both on and offsite’ under the direction of state and federal regulators.

The lawsuits also target other chemical companies over contamination at sites in Central and South Jersey. They include:

The pollution in Pompton Lakes dates back decades to when DuPont workers used the solvents TCE and PCE to clean machine parts and then dumped the used solvents into unlined open lagoons on the company’s 600-acre campus. The solvents migrated with groundwater under an adjacent neighborhood of 450 homes.

In 2008, officials announced that the solvents were vaporizing up through the soil into some basements. The neighborhood, which was also contaminated with mercury and lead, has elevated levels of non-Hodgkin lymphoma and kidney cancer among residents. More than 300 homes have had ventilation systems installed to remove the hazardous vapors.

DuPont signed an agreement with the Department of Environmental Protection in 1988 to clean up its own property and the groundwater beneath the neighborhood, but no cleanup plan for the groundwater plume has been approved after multiple failed pilot tests.

On Wednesday, Grewal and DEP Commissioner Catherine McCabe said they are also issuing a directive to DuPont and Chemours to pay for additional costs for sampling, testing and treating its pollution in Pompton Lakes.

‘We do recognize that DuPont and Chemours are conducting remediation at the site, but it is not enough,’ McCabe said.

Still, she said that efforts to clean the groundwater through the natural breakdown of the solvents over time as well as a pumping system to keep more from going under the neighborhood ‘are the maximum that we can do.’

That position has drawn criticism from some current and former residents. But many praised the lawsuits as the first time in more than a decade that the state took an aggressive stance against DuPont.

The new state directive would help an ongoing effort by the U.S. Fish and Wildlife Service to assess the Pompton Lakes contamination as it seeks its own settlement against DuPont for contamination in the borough. It expands the scope of that assessment to include groundwater and other areas like a nearby state forest that are not being addressed by the federal government.

Natural resource damage suits are authorized under New Jersey’s powerful Spill Act, giving the state a chance to seek money to restore tainted natural resources, such as groundwater or wetlands, and to compensate the public for its loss of those resources.

The awards go beyond the costs that a polluting company faces to actually clean up contamination.

These cases don’t always work out the way New Jersey would like.

A 2005 settlement the state brokered with DuPont resulted in the company’s giving 70 acres of forest in Wanaque for public use to atone for contaminated groundwater in Pompton Lakes and other sites throughout the state. But the land — also part of the former DuPont munitions facility — was contaminated with dangerously high levels of lead and arsenic. The deal drew criticism from many residents, who felt DuPont got away without adequately compensating the state. That land remains contaminated to this day.

The lawsuit over DuPont’s Pompton Lakes pollution is the second major action taken by Gov. Phil Murphy’s administration since the ‘Toxic Secrets’ series was published by The Record and NorthJersey.com in 2018. The state blocked a controversial cleanup plan by Chemours last year.

And he asked Grewal and McCabe to look into the Pompton Lakes case and report back to him.

It seemed little progress was being made by officials in ensuing months. In separate meetings with a group of residents and local officials in August, McCabe indicated that she was content with the current status at the DuPont site and in the neighborhood.

McCabe said she didn’t see the need for a major change in the way her agency is dealing with the contamination because concentrations of pollution have decreased in the shallow part of the aquifer.

DuPont installed a pump-and-treat system in 1998 to capture groundwater and treat it before it leaves the DuPont site, in order to keep even more contamination from spreading into the neighborhood.

McCabe said she was not in favor of placing similar pump-and-treat systems in the neighborhood, as some residents requested, saying it was better to treat the contamination at the source…"