Forever Chemicals’ From Navy Lab Flowing Into the Chesapeake Bay 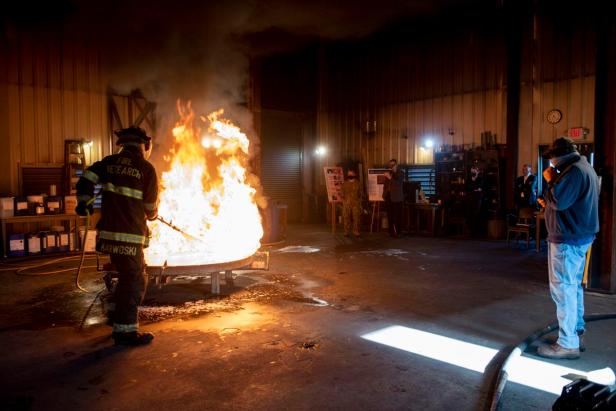 "David Harris grew up on a farm next door to the Naval Research Laboratory – Chesapeake Bay Detachment. He recalls camping with his scout troop on the 168-acre base overlooking the Bay and drinking water from the small stream that flows from the Navy property onto his family’s farm.

Until recently, much of what went on at the facility just south of Chesapeake Beach, MD, was a mystery to Harris. But at times in his youth, he said, ‘big plumes of black smoke’ rose over the facility. His mother told him their crops sometimes got a dusting of sooty ash.

Now 50 years old and still living next door, Harris worries about the health risks he and his family may have been exposed to from their military neighbor.

The Navy disclosed recently that it has found high levels of so-called ‘forever chemicals’ in soil, groundwater, and streams — not only on the base but beyond its fence line, including in the stream that flows through the Harris farm. Per– and polyfluoroalkyl substances, or PFAS, also have been detected in a few off-base wells, including one that Harris and his family drank from for years.

‘I am just freaking out a little bit, having grown up my entire life by the base and now raising my family here on the farm,’ he said during a virtual meeting in May at which the Navy disclosed its findings.

It may be hard to picture, but the seemingly quiet lab campus, with its mix of aging Quonset huts and modern radar domes, has some of the worst PFAS contamination of any military installation in the country. It’s earned a mention in the ‘Filthy Fifty Act,’ a bill introduced this summer in the U.S. Senate that would set testing and cleanup deadlines for the most PFAS-contaminated defense sites in the country.

PFAS are a group of more than 9,000 highly persistent chemicals, many of them toxic, which have been in wide use since the 1940s. They are found in everyday consumer products such as nonstick cookware, pizza boxes, and stain repellants. Their use in fire-fighting foams, though, has resulted in widespread PFAS contamination around airports and military bases nationwide.

Nationwide, PFAS has been detected at more than 300 military sites, including at least 10 in the Bay watershed, according to a report by the nonprofit Environmental Working Group.

‘The Bay really stands out,’ said Scott Faber, the group’s senior vice president of government affairs. ‘There’s no other resource, not the Great Lakes, not the Gulf of Mexico or any other resource, where the Department of Defense has such a significant presence and where there’s been testing done that creates cause for concern.’

The contamination at the Navy lab facility in Calvert County, MD, is in a class by itself, though, because it’s the first documented case in the region where streams carrying high levels of PFAS flow directly from the base into the Bay.”…