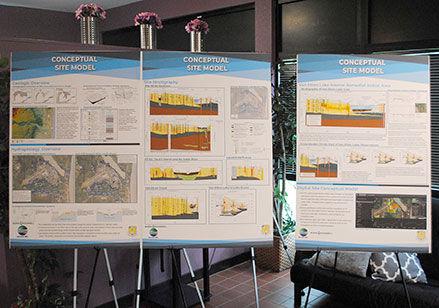 “The preferred approach for reducing the per- and polyfluoroalkyl substances (PFAS) entering Van Etten Lake (VEL) in Oscoda was discussed during an Aug. 31 public meeting hosted by the Air Force Civil Engineer Center (AFCEC).

As part of the 30-day public comment period, those from the Air Force (AF) sought input on the proposed Interim Remedial Action (IRA) plan for VEL, at Ken Ratliff Memorial Park, to address the PFAS compounds perfluorooctane sulfonate (PFOS) and perfluorooctanoic acid (PFOA). These and other PFAS are migrating into VEL from the former Wurtsmith Air Force Base (WAFB), via groundwater (GW), as a result of the aqueous film forming foam used at the site when it was an active base.

The reasoning for AFCEC’s preference being the GAC route was explained by Aerostar Senior Project Manager Paula Bond, as well as the Base Realignment and Closure (BRAC) Environmental Coordinator for AFCEC, Dr. Catharine Varley, who also serves on the Wurtsmith Restoration Advisory Board (RAB).

Participants could either attend the hybrid meeting in person at the Shoreline Players Community Theatre in Oscoda, or join virtually. It consisted of a technical presentation on the proposed plan, a question-and-answer session and a formal public comment period.

Answers were not given during the public comments; however, a court reporter was on hand to generate an official transcript and to capture oral remarks, which were to be included in the record.

For the technical presentation, Bond said she wanted to make sure everyone understands this is an interim remedial action. It’s not the final remedy for WAFB GW. ‘But again, an interim remedy to address some of those highest concentrations that we see moving toward Van Etten Lake.’

The preferred alternative, she said, will build on the success of the central treatment system (CTS) at WAFB, which was installed in 2018. And when that was built, it was done so with the ability to add capacity. ‘Which we are now doing with this IRA.

‘Again, it is an interim remedial action, while the remedial investigation (RI) is ongoing,’ Bond pointed out. And once the RI is complete, then a final remedy will be developed and presented in the feasibility study at that time.

She gave a refresher on the Comprehensive Environmental Response, Compensation and Liability Act (CERCLA) process – which is being followed while moving through the IRA steps – to highlight where things stand currently.”…