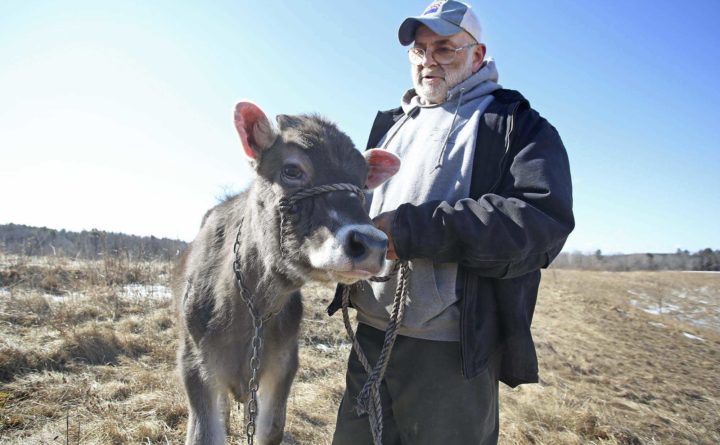 “ARUNDEL, Maine — Blood tests performed on Arundel dairy farmer Fred Stone, who became the face of PFAS contamination in Maine when his farm was shutdown due to its impact, show levels of the ‘forever chemicals’ 20 times the national average more than two years after he and his wife stopped drinking the milk and water on the farm.

On June 11, 2019, blood samples were drawn by the Stone family’s physician and sent to a laboratory in California. Test results show Stone’s blood contains PFAS levels of 111 parts per billion, and his wife, Laura Stone, tested for PFAS levels of 93.5 ppb.

According to the National Health and Nutrition Examination Survey, a program conducted by the U.S. Centers for Disease Control and Prevention, the average American has a level of approximately 4.7 ppb in their blood…

Stone was licensed in the 1980s to spread wastewater sludge on his fields and others across York County, but he said he never knew they contained PFAS chemicals.

‘When the contamination was discovered at the farm, we assumed that it must have gotten inside of our bodies because we have been drinking the water and milk for many years,’ Fred Stone said. ‘These blood test results add injury to insult. First, it was our farm, then it was our cows and now it’s us? When will this nightmare end?’

Attorney Benjamin Gideon of Berman & Simmons and his partner, attorney Susan Faunce, represent the Stones and Stoneridge Farm. Gideon said his clients ‘face a lifetime of negative health consequences.’ The Stones have filed a lawsuit against the manufacturers of the PFAS substances, including 3M and Dupont, and those responsible for spreading the contaminated sludge on their farm…

PFAS contamination at Stoneridge Farm was identified after the chemicals were detected in the water at the Kennebunk, Kennebunkport, Wells Water District’s Kimball Lane well in West Kennebunk, which was shut down in 2017.

Further testing at the Stone property revealed high levels of one type of PFAS compound, perfluorooctanesulfonic acid (PFOS), in the drinking water, soil, hay and cow milk. PFAS are a class of synthetic chemicals that never biodegrade in the environment, earning them the label of ‘forever chemicals.’ As a result of the contamination, the Stones have been forced to discontinue selling their milk and have had to shut down operations at their farm. The loss of business has been emotionally and financially devastating, Gideon said…

Stone was able to get the PFAS in his herd’s milk down to zero by purchasing a new herd from New York that had not been exposed to the farm’s water and feed, installing a $20,000 water filtration system and purchasing feed from out-of-state sources where hay is grown in fields not spread with sludge.

‘Financially, we’re sinking,’ he said. ‘Besides the filtration system and the feed, our costs include every bill for investigating and testing the water and monitoring the milk, and the loss to the value of our real estate. This whole thing has been a nightmare.’

Gov. Janet Mills in March announced the creation of a governor’s task force to mobilize state agencies and other stakeholders to review the prevalence of PFAS in Maine and to put forward a plan to address the chemicals.

The potential widespread impact of PFAS in Maine is a concern, Gideon said.

‘We are also concerned that the Stones are not alone,’ he said. ‘Most locations in Maine where municipal and paper company sludge were spread have not yet been tested for PFAS. We do not know how many farms or private wells are contaminated or how many Maine people face serious health risks from exposure to these dangerous “forever’ chemicals.” Through our lawsuit, we plan to try to find answers to these important questions’…”