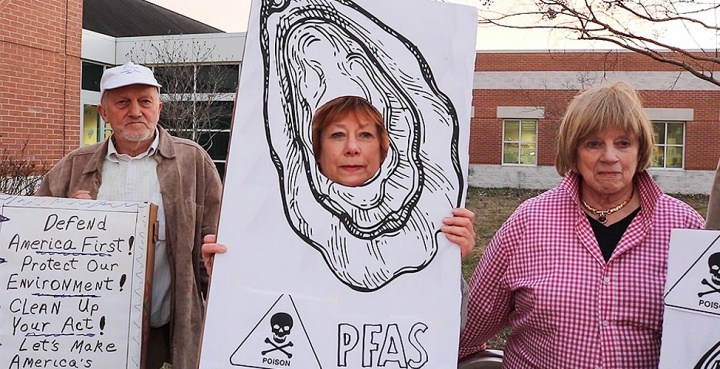 “The state of Maryland recently announced plans to test waters and sea life for PFAS contaminants near two military installations that have been known to use aqueous film-forming foam containing the carcinogens in routine fire training exercises.  PFAS chemicals  are known to be devastating to human health and the environment

According to the Bay Journal,  Lee Currey, director of the water and science administration for the state Department of the Environment, (MDE) said the agency intends to sample surface water and oyster tissue in the St. Mary’s River watershed for per– and poly-fluoroalkyl substances, or PFAS. The testing will take place near the shores of the Webster Field Annex of the Patuxent River Naval Air Station, which is located on St. Inigoes Creek and the St. Mary’s River.  Kathy Brohawn, chief of the MDE’s public health section, said the agency ‘tentatively’ plans to test oysters at Hog Point.

The decision to test the waters and sea life comes after 300 concerned residents showed up for an open house the Navy held at the Lexington Park, Maryland Library on March 3rd. They were concerned with a  test of a water sample I collected that showed a local waterway, St. Inigoes Creek, was contaminated with 1,894 parts per trillion of the carcinogens.

The water sample was collected in February, 2020 using a test kit provided by Freshwater Future, a firm located in Petoskey, Michigan. Freshwater Future’s PFAS testing program operates out of the University of Michigan Biological Station.  The water was analyzed following the EPA method 537 Revision 1.1  for 14 perfluoroalkyl substances, PFAS.

Several states have acted to limit or ban the consumption of seafood taken from waters with PFAS levels lower than those found in St. Inigoes Creek.  PFAS are a class of more than 6,000 chemicals that are threatening to human health.

Oysters in New Hampshire near the old Pease AFB contained 55,000 ppt of PFAS. Meanwhile,  public health scientists around the world, including  Dr. Phillippe Grandjean of Harvard University are warning the public, especially pregnant women, not to ingest more than 1 ppt daily of PFAS. Meanwhile, the EPA has issued a non-mandatory “advisory” of 70 ppt. in drinking water, while taking no measures regarding the consumption of PFAS in food.

By the mid-70’s Navy scientists were aware of the toxicity of the substances, although the command took no measures to protect human health or the environment. Nearly fifty years later, in response to questions about the contamination in St. Inigoes Creek, David Steckler, the remedial project manager who runs the environmental restoration program for NAS Patuxent River, said the Navy is ”extremely early in the process” of testing the sites for potential contamination. It’s a lengthy process, he said.

Perhaps it will take the Navy another 50 years to clean up the mess.

The ‘forever chemicals,’ as they are known, were allowed to leach into the groundwater and drain into the surface water, contaminating St. Inigoes Creek, the St. Mary’s River, the Patuxent River, and the Chesapeake Bay.

Ira May, who oversees federal site cleanups for the Maryland Department of the Environment, suggested that contamination in the creek, if it exists, could have another source. The chemicals are often found in landfills, he noted, as well as in biosolids and at sites where civilian fire departments sprayed foam.  The sample was collected about 2,000 feet from known uses of PFAS on the federal installation while the nearest civilian fire house is 4 miles away and the nearest landfill is 10 miles away.

A navy spokesman told the press there are two locations on Webster Field Annex where the chemicals were also released, including an area at the airfield where foam was sprayed and, as a precaution, the fire station on base would also be checked.  A report by CH2M Hill dated July 1, 2018, however, documents widespread use of the PFAS-lade fire retardants across the base…”