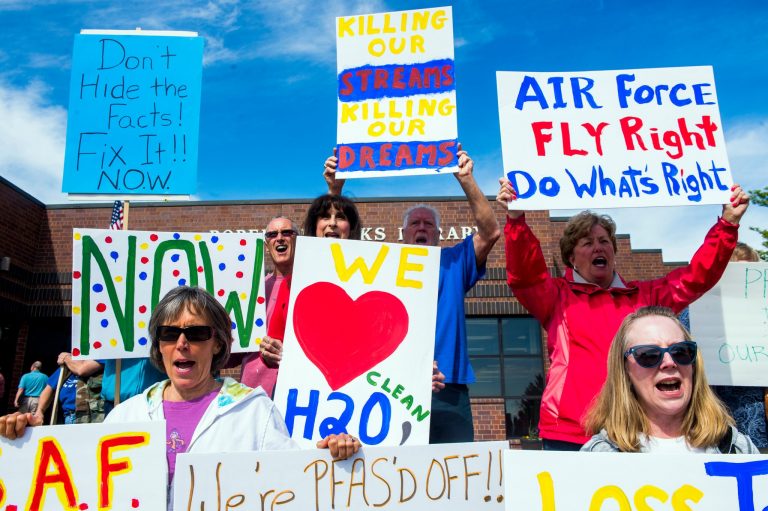 Read the full article by Eric Lipton and Julie Turkewitz

“WASHINGTON — Facing billions of dollars in cleanup costs, the Pentagon is pushing the Trump administration to adopt a weaker standard for groundwater pollution caused by chemicals that have commonly been used at military bases and that contaminate drinking water consumed by millions of Americans.

The Pentagon’s position pits it against the Environmental Protection Agency, which is seeking White House signoff for standards that would most likely require expensive cleanup programs at scores of military bases, as well as at NASA launch sites, airports and some manufacturing facilities.

Despite its deregulatory record under President Trump, the E.P.A. has been seeking to stick with a tougher standard for the presence of the chemicals in question in the face of the pressure from the military to adopt a far looser framework.

PFAS, as the chemicals are most commonly called, are present in a vast array of products, including food packaging, nonstick pans, clothing and furniture. They have been linked in recent years to cancers, immune suppression and other serious health problems…

In 2017, after military communities around the country began to report alarming levels of PFAS in their drinking water, the Pentagon confirmed that there were 401 known military facilities in the United States where it was used.

Further study by the Pentagon concluded that the PFAS contamination had turned up in drinking water or groundwater in at least 126 of these locations, with some of them involving systems that provide water to tens of thousands of people both on the bases and in nearby neighborhoods. In some instances, the Defense Department is providing temporary replacement water supplies.

The military and many airports nationwide have relied on PFAS-based firefighting spray because it can more quickly put out liquid fuel fires and it works when mixed with both fresh water and seawater.

The Defense Department has been moving in recent years to phase out the use of the most worrisome version of these chemicals and replace them with a formulation that does not break down in the environment as easily or build up as much in the bloodstream if it ends up in drinking water. But this replacement chemical is also generating health concerns.

The E.P.A. — after intense criticism from communities facing contaminated water, as well as from both Democrats and Republicans on Capitol Hill — is moving toward creating two new PFAS standards to address the problem nationwide.

The first would establish guidelines for when cleanups will be required at federally controlled sites to try to prevent that contamination from reaching drinking water supplies.

The second would set a legally binding, maximum allowable drinking water level for PFOS and PFOA, two of the most common forms of PFAS. Separately, the E.P.A. is preparing to designate these chemicals hazardous substances, meaning areas contaminated can be designated Superfund sites, formalizing the cleanup effort.

The E.P.A. completed its work on the first step, the proposed groundwater cleanup standard, last August, and transferred it to the White House Office of Management and Budget for approval, with a prediction that it would be finalized and made public by last fall.

But federal officials briefed on the negotiations, including the office of Senator Thomas R. Carper, Democrat of Delaware, the ranking member of the Senate committee that oversees the E.P.A., said major objections were raised by the Pentagon, as well as by NASA, another major user of PFAS, and the Small Business Administration…”