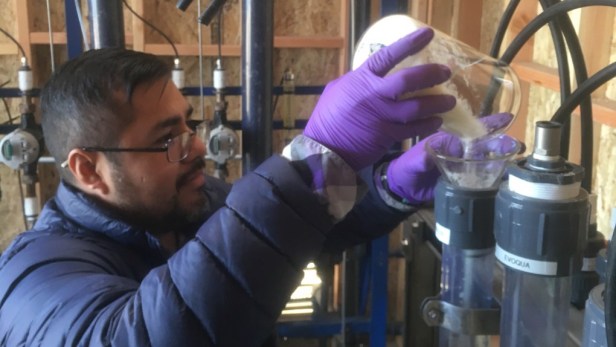 “Nine Orange County water agencies have retained a legal team to study whether to file suit to recoup the $1 billion or more it could cost to purify drinking water in local wells contaminated with PFAS chemicals and to pay for more expensive imported water in the interim.

The PFAS compounds — long used in Scotchguard, Teflon and other products — have leached into groundwater supplies over several decades and have been linked to a variety of health problems, including cancer, liver and kidney damages and ulcerative colitis. It’s likely that 3M and DuPont, the primary manufacturers of PFAS products, would be defendants.

Acceptable levels for PFAS compounds have been steadily lowered by state regulators, prompting the closure of some 42 of the 195 wells in the county’s primary groundwater basin in the past year. The number of shuttered wells in the county is expected to reach 71 by the end of the year, according water officials.

Eleven retail water agencies in the county are affected by the contaminants and are developing costly new treatment systems.

‘If we can get cost recovery from those who caused the problem, we think it’s appropriate so those costs aren’t passed on to our ratepayers,’ said Roy Herndon, the lead staff person overseeing possible litigation for the Orange County Water District.

The district manages the county’s primary groundwater basin, which serves 19 member water agencies and 2.5 million residents. To date, eight of the 11 agencies with PFAS contamination have signed up with the Orange County Water District to pursue possible litigation.

If the Orange County agencies file suit, they would join of a growing trend of PFAS litigation in areas where there is no PFAS manufacturing.

A decade ago, the first wave of major  lawsuits over PFAS chemicals — formally known as perfluorooctanesulfonic acid — came from places near such plants, where spilled or dumped toxins contaminated groundwater.

In 2017, chemical manufacturers DuPont and Chemours reached a $671 million settlement in a class-action suit brought by 3,550 people in West Virginia, who said they suffered health consequences from the toxic water. The case was portrayed in the last year’s Hollywood drama “Dark Waters.” And in 2018, 3M reached a $850 million settlement with the state of Minnesota for contaminating groundwater near its plant.

But as researchers find toxic repercussions from ever smaller quantities of the chemicals, lawsuits have started to be filed in areas where there are no manufacturing plants. The attorney general of Vermont, for instance, has filed suit against manufacturers for groundwater that’s been tainted by treated wastewater and runoff from landfills.

Normal treatment of wastewater and drinking water does not remove the PFAS toxins, which have been dubbed ‘forever chemicals’ because of their resistance to breaking down in nature.

There’s evidence that Orange County’s groundwater contamination comes from the same type of sources cited in the Vermont lawsuit. New York, meanwhile, has filed suit for contamination caused by runoff from airports, where the toxins have been used in firefighting foam.

Contamination from PFAS has been found throughout the state and country, including all Southern California counties. But Orange County has been harder hit than its neighbors, in large measure because of treated wastewater from the Inland Empire being released into the Santa Ana River and then absorbed into the county’s primary groundwater basin.

A study released last month measured for 12 PFAS compounds at 29 locations near the Santa Ana River and confirmed the presence of many of those compounds upstream of Orange County. Some water officials expect that treatment systems to remove the PFAS chemicals at the upstream wastewater plants will eventually be developed.

But the more immediate response has been to close affected drinking water wells and develop a series of local plants to treat the water coming out of those wells.

The Orange County Water District launched a $1.4 million pilot treatment project in December to determine the best type of filter to use in those plants. The long-term treatment operations are expected to begin coming online in about a year, according to Herndon. Total construction has been given a preliminary cost estimate of $250 million, while operations and maintenance over 30 years is pegged at roughly $500 million…”