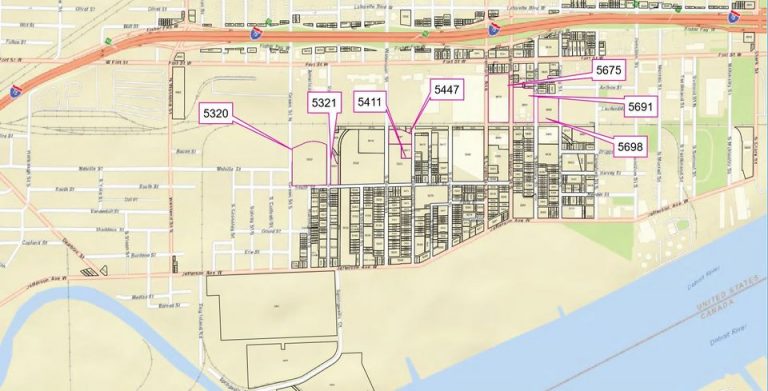 "Michigan’s search for PFAS contamination now touches the Gordie Howe International Bridge, where multiple samples over four months on the Detroit side of the project showed the chemicals in both soil and groundwater.

Now officials are ensuring that plans for soil movement and stormwater address the presence of the per- and poly-fluorinated chemicals as pre-construction activity accelerates this month.

The contamination discovery is not slowing the pace of the $4.4 billion project.

So far, ‘there have been no construction delays nor timeline adjustment because of the testing,’ said Michigan Department of Transportation communications director Jeff Cranson.

The Gordie Howe International Bridge over the Detroit River will be a third Detroit-based border crossing between the U.S. and Canada, and a major transportation hub to connect Canada’s Highway 401 with I-75.

The project is under way in Detroit’s DelRay neighborhood, where 190 acres comprised of former residential, commercial and industrial parcels were consolidated into the construction site.

Initial plans as soil investigations started in 2013 did not call for PFAS testing, but that changed over the past year as finding the chemicals became a priority in Michigan. Officials continue to try to fully define their threat to the state’s drinking water and environment, and plan to set drinking water standards for five types of PFAS before year-end.

The project has been under a streamlined environmental due diligence process, which the state approved in 2016. That allows consultants to consider historic use of the property to determine the likely risk of specific contaminants, while the entire site is considered for others – such as lead in soils and asbestos resulting from buried construction debris.

Soil samples taken over the past few years at the bridge site already found several contaminants that exceed either drinking water protection criteria or other limits set for to protect human health or to trigger cleanup. They include lead; several metals; polynuclear aromatic compounds, which are byproducts of burning coal, oil and gas; volatile organic compounds, or VOCs; PCBs and asbestos.

‘PFAS compounds were subsequently identified as a data gap because of the developing awareness of the potential for PFAS contamination in industrial areas like the Delray neighborhood,’ according to a 400-page consultant’s report provided to the MDOT.

MDOT is the underlying property owner for the project, according to the Windsor Detroit Bridge Authority.

Testing locations were determined by ‘the manufacturing history of each parcel during development of the plan,’ according to the report.

Twenty-two soil borings were done at seven parcels over four dates in September 2018. A total of 17 monitoring wells were installed, with samples of both soil and groundwater taken from each site.

While tests for multiple types of PFAS were part of the laboratory reports, the state has enforceable guidelines for two: PFOS and PFOA. The guidelines vary for where they’re found, ranging from groundwater to surface water.

Of the 46 soil samples, six exceeded the state’s guideline for PFOS where surface water and groundwater meet, or 240-parts-per-trillion. The highest level found in soil was 28,000-ppt.

Of the 24 groundwater ­­­samples, 10 exceeded at least one criteria.­­ The highest amount of combined PFOS and PFOA reached 710-ppt. Another site totaled 609-ppt, while a third was 263-ppt. The rest were below 60-ppt, with the lowest combined total at 3.2-ppt.

The peak amount of all PFAS in groundwater was 1,982-ppt near the northeast corner of South Street and South Post Street. That’s the same place where the peak total PFAS was recorded.

Additional groundwater tests were done in January. Results from that test did not exceed 20-ppt of combined PFOS and PFOA.

The PFAS locations in the water and the soil did not appear to be connected, according to consultants Mannik & Smith Group.

Both sets were ‘distributed throughout the study area without discernable source trend,’ the report said.

All residents in the area are connected to municipal water through the city of Detroit, which purchases it from the Great Lakes Water Authority – which, in turn, relies on water intakes in the Detroit River to supply some of its customer base. Other water comes from Lake Huron.

The Detroit River is about one-half mile from the PFAS locations, according to the state.

The state approved a stormwater management plan for the site this month. As water moves from the site, consultants said that either a drainage system or retention ponds could change the pathway between groundwater on the site and nearby surface water. Officials will monitor those changes, they said.

‘We’re very cognizant of our environmental requirements and obligations, and plan to follow that to the letter of the law,’ said Mark Butler, director of communications for the Windsor Detroit Bridge Authority…"