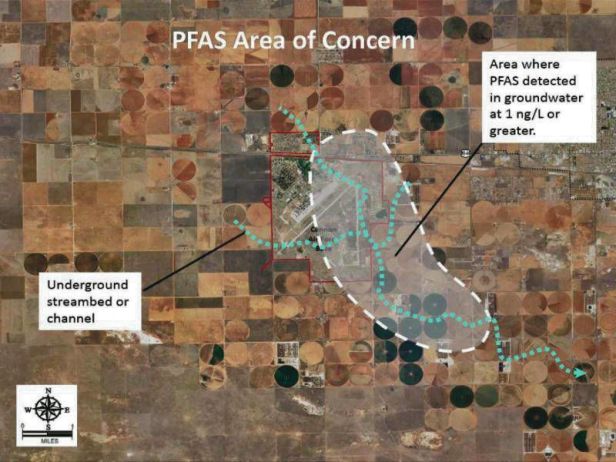 “In September 2020, the New Mexico Environment Department (NMED) finalized the settlement of an enforcement action against Cannon Air Force Base (CAFB), a federal facility, relating to the facility’s discharge of PFAS-containing wastewater to groundwater without a permit. According to the allegations of an administrative compliance order (ACO) issued in January 2020, CAFB had an existing groundwater discharge permit that was due for renewal, but the permit renewal application did not disclose the presence of PFAS in the facility’s discharge. Accordingly, NMED refused to administratively continue the permit without CAFB first submitting a renewal and modification application that reflected the presence of PFAS. As a result, CAFB’s groundwater discharge permit expired on March 31, 2019, and its subsequent discharges were therefore unpermitted. (It is notable that several months prior to the enforcement action, the Air Force and NMED had sued one another in federal court; the Air Force sued seeking a declaratory judgment that New Mexico’s state standard was arbitrary and capricious, while NMED alleges in its federal lawsuit that AFFF usage at the bases since approximately 1970 is the source of the PFAS found in area soils and groundwater, asserting claims under state law and RCRA.)

NMED alleged that the Air Force had failed to appropriately notify the agency of the change in the quality of CAFB’s discharge occasioned by the presence of PFAS, and also had been unlawfully discharging its wastewater without a groundwater discharge permit since April 1, 2019. It assessed a civil penalty against the Air Force totaling $1.7 million for multiple violations of state environmental regulations. After CAFB submitted a complete renewal and modification application, the State agreed to accept ‘an administrative fee’ of about $250,000 in full resolution of the civil penalties assessed in the ACO.

This matter points to the difficulty that states around the country are having in enforcing state PFAS standards against the U.S. Department of Defense – the entity that in many states is seen as a significant potentially responsible party with respect to PFAS contamination related to AFFF usage. The Department of Defense has raised numerous defenses and objections to state enforcement and litigation efforts, from sovereign immunity to arguments based on the absence of PFAS from the list of CERCLA hazardous substances, to (as in New Mexico) challenges to the validity of state regulatory standards for PFAS. Interestingly, in the settlement with NMED the Air Force also managed to avoid admission of any of the factual allegations in the ACO or of liability. For now, the friction between state PFAS regulation and enforcement and the Department of Defense continues.”