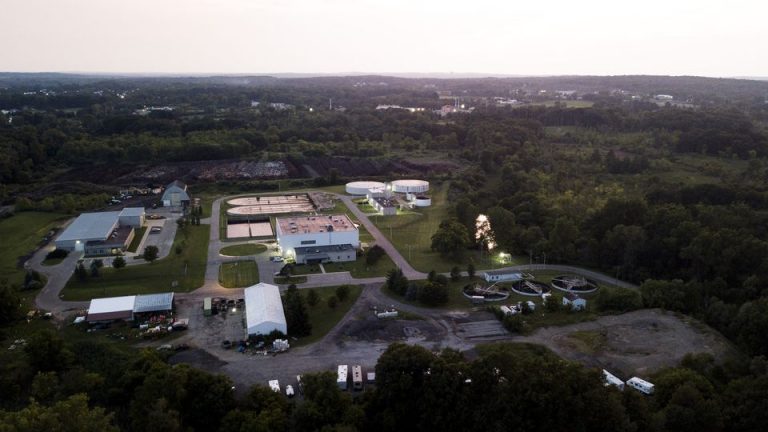 “LANSING, MI — The hunt for PFAS in Michigan is turning to farm fields, where concerns are growing about possible contamination in treated human waste used as fertilizer.

This month, scientists are analyzing test results from more than a dozen state agricultural sites that received the fertilizer — known as ‘biosolids’ — from wastewater treatment plants that were flagged in 2018 for high concentrations of the chemicals flowing into their systems from industrial sources or landfills.

The results could help build understanding of how the chemicals move into groundwater and possibly food supplies.

But more testing is planned and the state is considering a threshold for how much PFAS would be allowed in land-applied biosolids.

The fertilizer is solid human waste treated by a wastewater plant and tested against standards for metal content and pathogens. While treated liquid waste can be discharged into surface water, solids need a different approach. As a result, many of Michigan’s wastewater plants convert solid waste sludge into biosolids. After a treatment process that includes removing water, plants can send it to a farm instead of the more-expensive option of shipping it to a landfill.

The biosolids are put in the top 12 inches of soil to ‘improve and maintain productive soils and stimulate plant growth,’ according to the U.S. Environmental Protection Agency.

But concerns about that practice have been elevated after 2018 testing showed two dozen of Michigan’s wastewater plants are discharging high levels of the chemicals in their liquid waste after water containing PFAS enters the system from industrial sources. That prompted questions about what remains in the solid wastes…

‘We’re looking at the worst cases,’ said Jon Russell, a water resources division manager at the Michigan Department of Environment, Great Lakes and Energy (EGLE). The state is ‘trying to find the fields with the most biosolids applied to them and trying to find fields that might make the risks higher of them getting into groundwater. We’re looking for fields that have people living around them.’

A handful of wastewater facilities – including plants in Wixom and Ionia, where testing found very high PFAS levels in liquid effluent – have already been told to stop land-applying biosolids…

Regulators say the effort is complicated. Reasons include:

Across the U.S., about 47 percent of sewage sludge was land-applied in 2017, said Colin O’Neil of the Environmental Working Group.

‘A lot is going to farm fields with little or no questions raised about PFAS,’ said O’Neil, EWG’s legislative director.

Two types of the chemicals – PFOS and PFOA – are regulated in surface water, and 20 percent of the wastewater plants were violating of a 12 parts per trillion (ppt) state limit on PFOS in surface water.

The city of Lapeer was at the front end of that investigation after PFOS found in Flint River fish led state officials to the wastewater plant and a local chrome plating company. The industrial contamination resulted in 2,000-ppt of PFOS flowing into the river from the plant.

Lapeer had been land-applying that waste, including on a nearby field it leased to a farmer who, until 2018, grew soybeans. A portion of the property had PFOS at 500-ppb, according to tests done for the state.

The city sent 548 dry tons of former sludge to the field over three years. Now it’s trying to come up with a new solution for its sludge and also for the field contaminated with PFAS.

‘We’re going to move it from crop production and turn into a tree farm,’ Lapeer City Manager Dale Kerbyson said in early 2018. He added that the soybeans were not used for food.

But the issue of how the contaminated soil might affect food is a growing concern. Exposure to per- and poly-fluorinated compounds have been linked to cancer and other adverse health effects.

In Maine, public health advocates began calling for an end to using biosolids as fertilizer this spring after the contaminants were found in the milk from a diary farm herd. In Wisconsin, the city of Marinette stopped land-applying biosolids after high contamination levels were found in wastewater.

‘The awareness of this issue is growing in the farming community for sure,’ Russell said.