[Blog] The big reveal: Hundreds of health studies on next gen PFAS 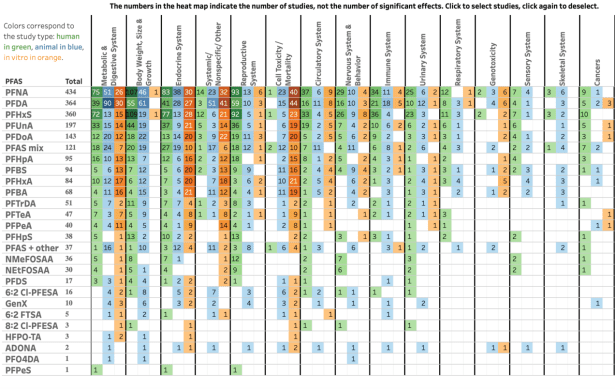 These are well known tactics of the chemical industry, including the producers of PFAS. For example, 3M denies there is a causal connection between any health outcomes and PFAS, even well known bad actors like PFOA. And industry scientists try to delay action by urging evaluation of PFAS individually, instead of as one class (as called for by leading scientists in the field). But we don’t need to get trapped in industry’s games, science shows us it is beyond time to act to protect public health.

Ever since it became clear that two legacy PFAS, PFOA and PFOS, posed serious health risks to people, the message from chemical manufacturers is that their replacements are safe. Although still PFAS, they are purported to be less persistent and less toxic. Many people have been concerned, however, that one toxic chemical has been exchanged for another. This common phenomena is known as ‘regrettable substitution’ and typically, very little research exists on the substituted chemical, which leads to substantial delays in action.

Two years ago, a group of scientists from NRDC and The Endocrine Disruption Exchange began to wonder, ‘how much do we know about the health effects of PFAS beyond PFOA and PFOS?’ Thus began the PFAS-Tox Database project—the building of an interactive database of all the publicly available health and toxicology studies published through May 2019, organized into 15 health outcome categories…”