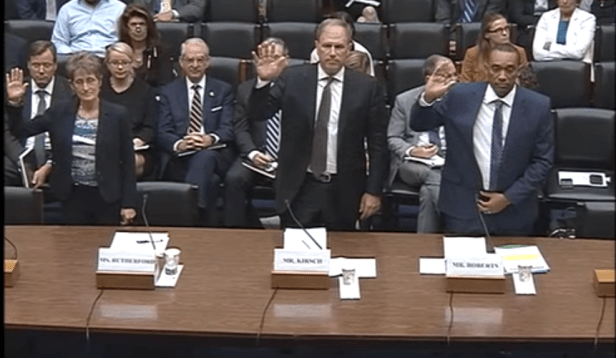 “Near the end of a congressional hearing last week, Congresswoman Debbie Wasserman Schultz grilled executives of the 3M, DuPont and Chemours chemical companies about their willingness to compensate people harmed by fluorinated compounds. The hearing, before a U.S. House subcommittee on environmental oversight and reform, was the third in a series amid pending legislation that aims to better regulate the chemicals, known collectively as per- and polyfluoroalkyl substances or PFAS, nicknamed “forever chemicals” because of their persistence in the environment.

At the core of the hearings is whether the companies should share in the costs of the cleanup of PFAS contamination across the country, as well as the costs of adverse health effects caused by them.

According to the advocacy organization, the Environmental Working Group, PFAS contamination has been found in tap water for 19 million Americans in 43 states. North Carolina is said to have the third-worst PFAS pollution problems in the country. Affected areas include the Cape Fear, Deep and Haw rivers, Jordan Lake and areas surrounding Chemours’ Fayetteville Works plant in Bladen County…

The contamination has been detected across the country in food, water, soil and air and at military bases and airports, where firefighting foam containing PFAS has been widely used for decades for training exercises…

The more than three-hour hearing provided insight into the companies’ willingness to take responsibility for the contamination. An exchange between Wasserman Schultz, a Democrat from Florida, and Daryl Roberts, DuPont’s chief operations and engineering officer, was particularly illuminating:

Wasserman Schultz: ‘Are any of your companies that were responsible for using any of these chemicals that firefighters and military service members were exposed to planning any type of compensation to harmed victims?’

Roberts: ‘At this point, the DuPont Company is focused on cleaning up and remediating the sites we operate. That’s our focus, as well as reducing the amount of firefighting foam that we use on our sites, but that’s the limit of where we are focused at this time.’

Wasserman Schultz: ‘So no.’

Roberts: ‘We are focused on what … (interrupted by Wasserman Schultz)

Wasserman Schultz: ‘Yes or no.’

Roberts: ‘We will continue to focus on what’s within our control.’

Wasserman Schultz: ‘That’s not a yes or no answer. Yes or no, are you planning at any point on compensating people who have been harmed by your company’s chemicals?’

Roberts: ‘Congresswoman, are you speaking specifically about armed forces around the world?’

Roberts: ‘We are focused on working through … (interrupted again)

Wasserman Schultz: ‘Ok, the other two people if you could answer please … Let the record reflect that the gentleman (Roberts) essentially said no, there are no plans.’

Paul Kirsch, president of fluoroproducts for Chemours, replied ‘no’ to Wasserman Schultz’s question as well. He also said his company has had no involvement with the two PFAS legacy compounds, PFOA and PFOS, which are found in firefighting foam and had routinely been used in everyday products such as Teflon, food packaging and water-resistant clothing.

Chemours spun off from DuPont in 2015. Chemours is a leading producer of GenX, a chemical cousin of PFOA, which DuPont had made at the Fayetteville Works plant from 2002 until voluntarily agreeing with the EPA to phase out its use around 2009 for environmental and health reasons.

GenX and thousands of other fluorinated compounds took the place of GenX and PFOA.

Chemours was found in 2017 to have contaminated drinking water with GenX for an estimated 250,000 people in New Hanover, Brunswick and Pender counties who draw their water from the Cape Fear River downriver of the plant. The state considers levels of GenX and other PFAS found in the river today to be safe to drink, but scientists continue to study the health effects of the unregulated chemicals.

Responding to Wasserman Schultz’s question, Denise Rutherford, 3M’s senior vice president of corporate affairs, said 3M has no plans to compensate people because there is no scientific evidence proving that PFOA or PFOS have caused anyone adverse health effects, a statement she repeated throughout the hearing…

Before that exchange, lawyer Rob Bilott and former Minnesota Attorney General Lori Swanson outlined information contained in internal documents obtained through litigation of DuPont and 3M. The documents indicate the companies knew the dangers of PFOA and PFOS decades ago and covered them up.

Swanson and Bilott, a lawyer with Taft Stettinius & Hollister in Cincinnati, said they seriously doubt the companies would have taken responsibility for cleaning up contaminated sites near their plants in Minnesota and West Virginia if it had not been for years of litigation that resulted in multi-million dollar settlements.

Bilott has spent 20 years fighting DuPont over PFOA contamination surrounding its plant in Parkersburg, West Virginia. In 2017, Chemours and DuPont agreed to settle a class-action lawsuit filed by Bilott for $671 million.

As part of that lawsuit, Bilott formed a science panel that concluded PFOA is likely to cause kidney and testicular cancer, ulcerative colitis, preeclampsia, thyroid disease and high cholesterol…

Minnesota sued 3M over drinking water contamination and environmental damage  in 2010. The state won an $850 million settlement last year. The money will be earmarked for cleanup, Swanson said.

Despite that settlement, and the internal 3M documents, Rutherford, a company vice president, maintained that there is no concrete scientific evidence showing that PFOA and PFOS cause adverse human health effects. She said 3M scientists have studied company workers with much higher exposure to the compounds and found no related health problems…

Kirsch, the Chemours executive, blamed DuPont for the contamination it created and for not assuming much more of the liability and legal costs when Chemours was spun off of DuPont four years ago.

Kirsch said Chemours has entered into a consent order with North Carolina and the environmental group Cape Fear River Watch to clean up the contamination. He pointed out the company is spending $200 million on cleanup efforts and cutting emissions of GenX by 99 percent at its Fayetteville Works plant. He said costs are expected to soar ‘way north’ of the $200 million figure as the company works to contain contamination at all of its plants…”