The Problem Of ‘Forever Chemicals’ in Marinette, and the Solutions That Could Take as Long 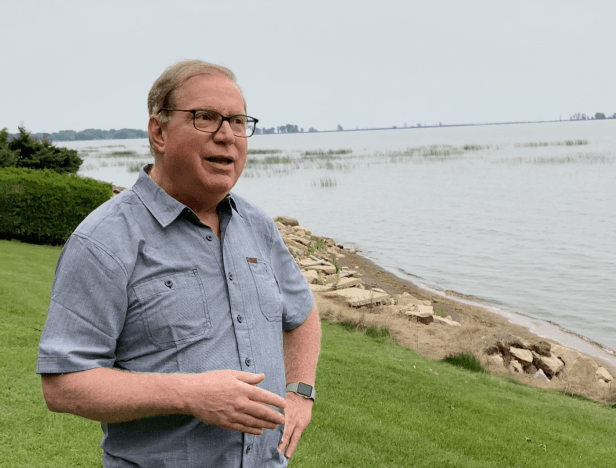 Read the full article by Christina Lieffring (Up North Issues)

“Chuck Boyle drives around Marinette and the Town of Peshtigo, regularly pulling over at places where creeks and drainage ditches intersect with the road. Born and raised in Peshtigo, an unincorporated township along Green Bay, Boyle has mapped these waterways out in his head, knowing where the water comes from and where it flows.

More often than not, Boyle sees the telltale bright white, almost luminescent foam building up in the creeks’ nooks and crannies: per- and polyfluoroalkyl substances, more commonly known as PFAS.

PFAS, man-made chemicals shown to have adverse health impacts, have spread through the area’s waterways, wastewater system, agricultural land and residents’ wells. But years after the contamination was disclosed, its extent and its impact on the community has still not been fully assessed. Instead of proactively addressing the issue, residents, local politicians and state regulation agencies have had to push the responsible company to fully reconcile the damage done.

PFAS contaminants are commonly found in products like firefighting foam and stain-resistant sprays. Nicknamed ‘forever chemicals,’ they do not break down naturally and have been linked to medical conditions such as low birth weights, cancer, and thyroid hormone disruption, and they can suppress antibody production, limiting the immune system’s ability to fight infection and reducing the effectiveness of vaccination.

In 2013 Tyco Fire Products, a firefighting foam manufacturer, discovered that its foam testing facility had been releasing the toxic contaminants into area groundwater. It’s unknown for exactly how long the foam has been leaking into the groundwater, but it could be decades; Tyco had tested foam at that site since 1962. The company, however, only briefly mentioned the contamination in a 2,300-page report to the Wisconsin Department of Natural Resources (DNR) in 2016 and did not alert the public until late 2017.

The Environmental Protection Agency designated PFAS levels above 70 parts per trillion (ppt) as potentially hazardous to human health. The DNR’s groundwater testing in Marinette has found one PFAS compound, Perfluorooctanoic acid (PFOA), at levels as high as 254,000 ppt, and another compound, Perfluorooctanesulfonic acid (PFOS) at levels as high as 64,000 ppt.

When the contamination was first made public, Boyle started organizing what would become Save Our H2O, a group of area residents that monitors PFAS contamination and urges Wisconsin’s Department of Health Services (DHS), the DNR, and Tyco (which merged with Johnson Controls International in 2017)  for more testing and filtration.

While that pressure has led to some action–growing awareness of PFAS, a bill in the statehouse limiting the use of PFAS-laden firefighting foam, warning signs along contaminated waterways and expanded testing–much remains undone.

In 2020 the DNR proposed setting a PFAS groundwater standard of 20 ppt, but industry lobbyists thwarted that regulation. At the behest of Wisconsin Manufacturers & Commerce, the state’s largest business lobby, the proposed rule was tabled by the DNR Board, and the agency is unable to enforce PFAS contamination regulations. Meanwhile, more of these contaminants are being detected across the state. In July of this year, the city of Eau Claire discovered unsafe PFAS levels in one quarter of its municipal wells.

As a temporary (and ongoing) solution in Peshtigo and Marinette, in 2017 the DNR ordered JCI/Tyco to install filtration systems and provide bottled water to the over 140 residents with wells known to be contaminated. This August, Tyco broke ground on a system that will extract and filter groundwater, reducing PFAS to a level yet to be set by the DNR before dumping the water into a ditch that runs into Green Bay.

The system will not remove all of the area’s PFAS contamination, nor will it address the contaminants in residents’ wells.

Residents who have been watching this issue closely are concerned that there still hasn’t been a full account of the extent of the contamination and its impact on the community. Many also suspect that this latest effort to clean the groundwater is the company’s way to wash its hands and walk away from the damage it’s done.”…