We sampled tap water across the US – and found arsenic, lead and toxic chemicals 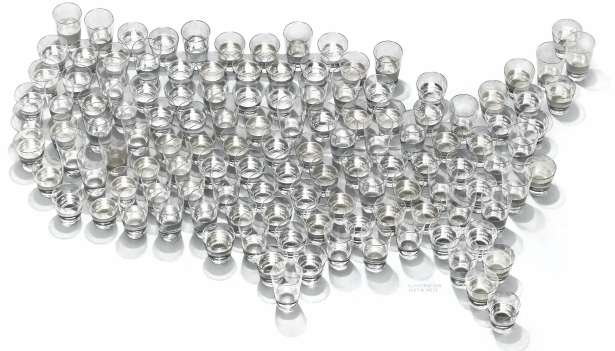 “In Connecticut, a condo had lead in its drinking water at levels more than double what the federal government deems acceptable. At a church in North Carolina, the water was contaminated with extremely high levels of potentially toxic PFAS chemicals ( a group of compounds found in hundreds of household products). The water flowing into a Texas home had both – and concerning amounts of arsenic too.

All three were among locations that had water tested as part of a nine-month investigation by Consumer Reports (CR) and the Guardian into the US’s drinking water.

Since the passage of the Clean Water Act in 1972, access to safe water for all Americans has been a US government goal. Yet millions of people continue to face serious water quality problems because of contamination, deteriorating infrastructure, and inadequate treatment at water plants.

CR and the Guardian selected 120 people from around the US, out of a pool of more than 6,000 volunteers, to test for arsenic, lead, PFAS (per- and polyfluoroalkyl substances), and other contaminants. The samples came from water systems that together service more than 19 million people.

A total of 118 of the 120 samples had concerning levels of PFAS or arsenic above CR’s recommended maximum, or detectable amounts of lead. Testing of the samples showed:

The study has some limitations: the quality of the water at one location on a single day doesn’t necessarily reflect the quality of the water supplied by an entire system or at other times. But the ambitious undertaking, with community water systems chosen by CR’s statisticians from a representative mix of systems across the country, provides a unique view into some of the most significant challenges in America’s ongoing drinking water crisis.

Almost every sample tested had measurable levels of PFAS, a group of compounds found in hundreds of household products. These chemicals are linked to learning delays in children, cancer, and other health problems. More than 35 percent exceeded a safety threshold that CR scientists and other health experts believe should be the maximum.

Yet many consumers have never heard of PFAS.

Hung Ng, a resident of Florida, New York, says he has long used home water filters, in part to remove lead. But the 69-year-old says he didn’t know anything about PFAS until he had his water tested as part of this investigation, which found comparatively high levels of the chemicals in his water. ‘Now I’ve got to find something to filter out the PFAS,’ Ng says.

The tests revealed other problems as well. About 8% of samples had levels of arsenic – which gets into drinking water through natural deposits or industrial or agricultural pollution – above CR’s recommended maximum for drinking water. And almost every sample had measurable amounts of lead, a heavy metal that leaches from corroding water lines and home plumbing fixtures. It is unsafe at any level.

In response to the findings, Environmental Protection Agency spokesperson Andrea Drinkard says that 93% of the population supplied by community water systems gets water that meets ‘all health-based standards all of the time’ and that the agency has set standards for more than 90 contaminants. That includes arsenic and lead but does not include PFAS.

America’s water crisis, while widespread, affects some communities more than others, according to an analysis of more than 140,000 public water systems published by the Guardian in February. It found that access to clean drinking water is highly unequal in the US, with water systems that service poorer and rural counties far more likely to have violations than those that provide water to wealthier or urban ones. Water systems in counties with large Latino populations were particularly likely to have violations, the Guardian found…”