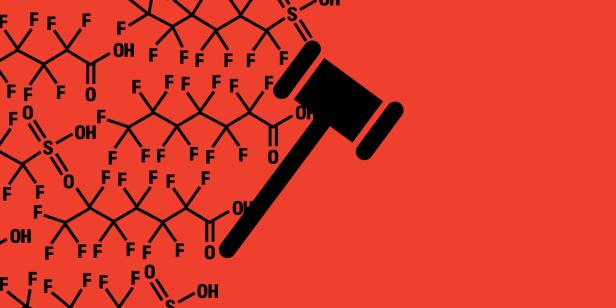 “NEW JERSEY IS battling the chemical company Solvay Specialty Polymers over critical information about a recently identified group of PFAS compounds. The company has provided the New Jersey Department of Environmental Protection with studies showing that the chemicals, which it has released near its plant in West Deptford, are toxic. But Solvay has forbidden the state agency from sharing the details of the chemicals’ effects on health and the environment on the grounds that they are confidential business information.

On November 10, the New Jersey Department of Environmental Protection sued Solvay over the PFAS contamination, charging the chemical manufacturer with violating multiple environmental laws by releasing the toxic industrial compounds into soil, water, and air near the plant. The suit also demanded that the company allow the state agency to release information about the newly discovered chemicals’ effects on health and the environment.

Solvay had previously used other PFAS compounds, including PFOA and a molecule called PFNA, at its Southern Jersey plant. By 2010, the company stopped using those compounds, which remain in the body for years and are associated with multiple health effects, though it soon became clear that they had contaminated local drinking water. New Jersey has since regulated both compounds, setting among the most stringent safety levels in the country.

According to the recently filed suit, ‘Solvay has used — and continues to use — “replacement” PFAS products at the Site, the identities of which it claims are confidential.’ In April 2019, the company admitted to having used the unregulated chemicals for the past two decades, according to the suit. Solvay is also refusing to release information to the public about the basic structures of these unregulated replacement PFAS compounds as well as emissions information, safety data sheets, and studies that show the environmental and health risks they pose, arguing that they’re proprietary information.

In an emailed statement, Solvay said, ‘We have made considerable effort to engage in good faith with the NJDEP, including offering multiple proposals to launch a cooperative, expedited, and scientifically reliable investigation of our current process aids. We are surprised and disappointed that rather than pursue this expedited and cooperative route, NJDEP has decided to take the litigation path. We intend to defend ourselves vigorously against NJDEP’s inaccurate, overly broad, and meritless allegations. We remain committed to completing our investigation and remediation of PFAS impacts scientifically attributable to our West Deptford facility in compliance with applicable laws and regulations.’