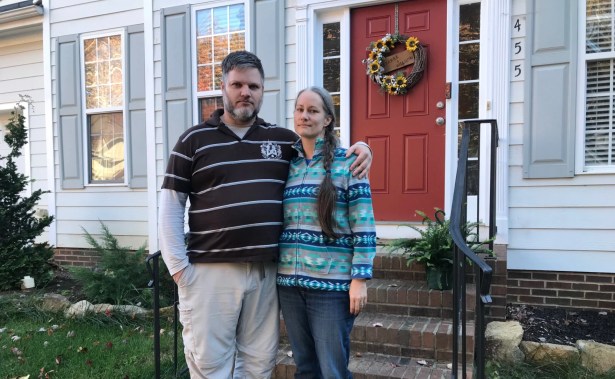 “Hundreds of Pittsboro residents volunteered hours over one weekend last month to be poked, prodded, weighed and measured in an attempt to learn more about the presence of chemicals in their bodies and, by extension, in their water systems.

The effort was the latest iteration in what’s become a long-term study of per- and poly-fluoralkyl substances, a class of thousands of chemicals known collectively as PFAS, in North Carolina residents who’ve been exposed via water and, at times, air pollution.

Steve Ferrin came out with his wife Ruta and three boys to spend hours on Nov. 14, a sunny Sunday morning, indoors at a local agricultural extension office. All but their youngest gave blood and urine samples, had their height and weight measured, and answered questionnaires for ongoing studies being led by researchers from North Carolina State University.

Steve Ferrin and his wife Ruta came out with their sons Matthew, 11, Benjamin, 10 and Christopher, 4 to the testing event in Pittsboro on Nov 14. All but Benjamin had their blood tested for PFAS. Photo credit: Rose Hoban

‘There have been a lot of concerns about the PFAS being in the water. They test for all of them, apparently,’ Ferrin said. ‘Testing for the PFAS, that’s an expensive process. Here, we can do it, we get it for free and find out if we’re being exposed to something we shouldn’t be.’

The past two decades have brought intensive study of PFAS and their health effects which include immune disruption, damage to the livers, kidneys and thyroids – among other problems – of exposed people. But there’s still no comprehensive understanding of how they move through people and the environment.

The 209 people tested in Pittsboro are part of the latest round of research being conducted to determine the extent to which North Carolina residents are being affected by the industrial pollution. The PFAS problem came to wider notice in June 2016 when the same researchers noted the presence of high levels of one form of PFAS — GenX — in the Cape Fear River downstream from the Chemours Fayetteville Works facility in Bladen County.

Since then, the NCSU researchers have tested residents’ blood in Wilmington and Fayetteville, and now Pittsboro, looking for signs of the contamination in residents’ bodies. Along the way, they’ve learned a lot about the persistence of different forms of PFAS in people, been confounded by some results, and contributed to the growing body of knowledge that’s led for some to call for a halt to the chemicals’ use altogether.

No GenX ≠ no problem

November’s testing event in Pittsboro came only days after the same study team released the results of similar biological testing among residents in the Fayetteville area.

During a public meeting held on Nov. 10, the researchers reported that in blood samples collected from 153 people in 2019, they did not find GenX in people’s blood.

‘Similar to the results of previous studies, the blood test results from the Fayetteville area that were announced in the GenX Exposure Study demonstrate that again GenX was not found in the blood of participants,’ said a statement from Chemours, the following day.

Earlier studies had similarly not found much GenX in the blood of people who had been drinking Wilmington water.

‘Once again the results showed that legacy compounds not associated with Chemours manufacturing were the compounds most prevalent in participants,’ the Chemours statement continued.

Jane Hoppin, a professor from NC State University who is the lead scientist on the research, said conclusions are not so cut and dry.

What Hoppin and her team have been able to determine from all their testing is that GenX doesn’t stick around in human bodies for as long as older chemicals in the same class.

That doesn’t mean GenX’s passage through those bodies is benign. Hoppin made a comparison to alcohol.

‘You could go and drink at a bar and we could measure your blood alcohol level within the next 24 hours and have some maybe idea of what you drank. But we wouldn’t ever be able to estimate a lifetime of drinking alcohol by a biological sample that we collect today,’ she said. ‘It doesn’t mean that drinking alcohol doesn’t have health consequences.’

Hoppin said that what’s needed in these studies is a better way to understand and reconstruct human exposure to industrial chemicals.

‘We know that people in Wilmington were drinking 700 parts per trillion of GenX for maybe 40 years,’ she said. ‘That may or may not have any health consequences, but to say that just because we can’t measure it in them today doesn’t mean it’s not toxic, it means that biological markers are a bad way to estimate that exposure.’”